Gerry Fraley had a pretty good (if predictable) story in yesterday's St. Louis Post-Dispatch about the prevalence of so-called smokeless tobacco among major leaguers. I say predictable because the story was undoubtedly inspired by St. Louis Cardinals phenom Chris Duncan, whose prodigious output at the plate is rivaled only by the prodigious wad that's always present between, as the dippers used to say, his cheek and gum. 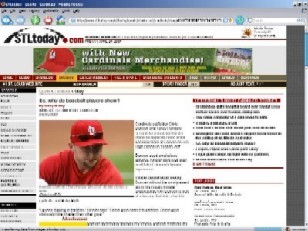 Fraley devotes a portion of the story to Major League Baseball's official stance on Skoal, Red Man and the like:

MLB would like to rid the game of tobacco's stain.

Clubs cannot provide tobacco to players, a radical change from the days when clubhouses brimmed with cartons of cigarettes, pouches of tobacco and tins of snuff.

In 1993, MLB banned the use of tobacco by all minor-leaguers not on 40-man major-league rosters and therefore not represented by the Major League Baseball Players Association. MLB hoped the bottom-up approach would wean players from tobacco before they reached the majors.

With that in mind, here's an interesting image from across the pond: 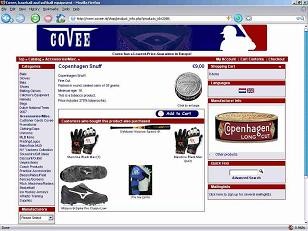 While making note of the MLB logo's proximity to the can o' snuff, don't fail to notice the small print:

Not to cast any aspersions at Covee, which, by all appearances, is one kickass Dutch sporting-goods store -- and a company that promptly got back to me when I asked them about the trade in American snuff and their association with MLB.

"We have been in business for over 30 years," Covee's Edwin Corpeleijn writes via e-mail. "We know several people within the MLB organization. They know we have the logo on the site.... I was told, that as long as we keep the colors the same, it is no problem."

As for the market for Copenhagen in the Netherlands, writes Corpeleijn: "Some players like to have the chewing tobacco, so we buy it. I have never tried it and I will never try it, but since it is not prohibited here, we just sell it to satisfy the customer's needs. We have the pay 275% tobacco tax on these items, but players here do not seem to mind."