St. Louis Woman Gets Out of Jury Duty By Threatening to Shoot Up the Courthouse 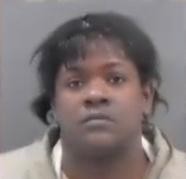 kmov.com
What up, Holmes? Zynthia Holmes
Yep, here's one way to avoid jury duty. Threaten the jury supervisor that you'll come back with a gun and start shooting people if you have to serve another day.

That's what happened Monday at the St. Louis Circuit Court downtown. Zynthia Holmes, 36, of north St. Louis was part of the jury pool in the Carnahan Court House. When apprised that she would have to return for service the next day, Holmes reportedly stormed out of the building and crossed the street to the Civil Courts.

There she confronted jury supervisor Mike Devereaux and allegedly threatened to return with a gun and start shooting.

Holmes was charged yesterday with the misdemeanor charge of harassment by frightening or causing emotional distress.

View jury supervisor Mike Devereaux's reaction to the skirmish below...