Franzen Nominated for Another Prestigious Award 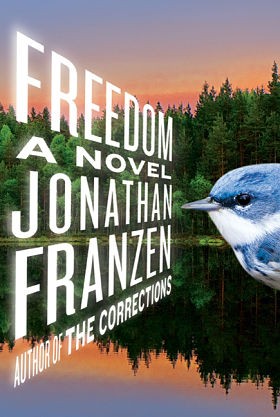 Does the Bad Sex in Fiction Award come with a little sticker that goes on the cover?
Jonathan Franzen's latest novel Freedom may not have been nominated for the National Book Award (though it sold way more copies than the eventual winner, Lord of Misrule by Jaimy Gordon -- which Daily RFT paid absolutely no attention to because it has nothing to do with St. Louis). But it just scored a nomination for another award that may be even more important: the Literary Review's coveted Bad Sex in Fiction Award!

Since the Literary Review is an English publication, most of Franzen's competition is British, but he does face some stiff -- heh heh -- competition from another book on the list of finalists with a St. Louis connection: Mr. Peanut, by Adam Ross. Ross received his MFA from Washington University and went on to write for the RFT's former sister paper, Nashville Scene.

The Literary Review doesn't specify which passage compelled the editors to nominate Freedom for the Bad Sex in Fiction Award, but perhaps no literary sex could be as dismal as the "sex" in this passage:

As far as actual sex goes, Patty's first experience of it was being raped at a party when she was seventeen by a boarding-school senior named Ethan Post....Very probably, in the cast swimming pool at Kim McClusky's, on a beautiful warm May night, Patty had given Ethan Post a mistaken impression. She was far too agreeable even when she wasn't drunk. In the pool, she must have been giddy with agreeability. Altogether, there was much to blame herself for. Her notions of romance were like Gilligan's Island:"as primitive as can be." They fell somewhere between Snow White and Nancy Drew. And Ethan undeniably had the arrogant look that attracted her at that point in time. He resembled the love interest from a girls' novel with sailboats on the cover. After he raped Patty, he said he was sorry "it" had been rougher than he'd meant "it" to be, he was sorry about that.

One of the rivals.
Unless it's this, from Mr. Peanut. Let's be clear: if the Literary Review were judging on the basis of the awfulness of the sex act, the passage from Freedom would win hands down. (Rape is not cool, obviously.) But the way this passage is written makes even consensual sex sound grim:

She was not his wife but a giant she-creature, an overlarge sex pet: his to screw, groom, and maintain. After they made love, she lay facedown on the bed, palms turned up toward the ceiling, eyes glazed open and body motionless...Alice shot dead by David's potent love.

Update: The Guardian has printed the cited passage from Freedom. It does not, fortunately, concern Patty's rape, but instead phone sex between her son Joey and his girlfriend Connie:

One afternoon, as Connie described it, her excited clitoris grew to be eight inches long, a protruding pencil of tenderness with which she gently parted the lips of his penis and drove herself down to the base of its shaft. Another day, at her urging, Joey described to her the sleek warm neatness of her turds as they slid from her anus and fell into his open mouth, where, since these were only words, they tasted like excellent dark chocolate.