3 Reasons Why Medical Marijuana is Junk Science, According to Feds 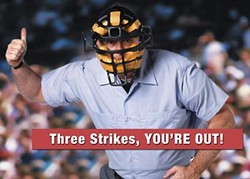 Medical marijuana: You're outta here!
On Friday the U. S. Department of Health and Human Services at long last responded to an 11-year-old petition that asked the federal government to reconsider its stance on the use of medical marijuana.

The ruling last week likely won't encourage Missouri to join the more than one dozen states and the District of Columbia, which have approved some use of marijuana for treating illnesses in recent years. In sticking to its guns, the DHHS cited three key reasons why it believes medical marijuana is crackpot science. They are:

2. Marijuana has no currently accepted medical use in treatment in the United States. According to established case law, marijuana has no ''currently accepted medical use'' because: The drug's chemistry is not known and reproducible; there are no adequate safety studies; there are no adequate and well-controlled studies proving efficacy; the drug is not accepted by qualified experts; and the scientific evidence is not widely available.

3. Marijuana lacks accepted safety for use under medical supervision. At present, there are no U.S. Food and Drug Administration (FDA)-approved marijuana products, nor is marijuana under a New Drug Application (NDA) evaluation at the FDA for any indication. Marijuana does not have a currently accepted medical use in treatment in the United States or a currently accepted medical use with severe restrictions. At this time, the known risks of marijuana use have not been shown to be outweighed by specific benefits in well-controlled clinical trials that scientifically evaluate safety and efficacy.

In response, the National Organization for the Reform of Marijuana Laws (NORML) said the DHHS ruling reaffirmed the the administration's "flat Earth position" regarding the medical properties of cannabis.

It's worth noting that federal regulators only weighed in on the issue after NORML and others sued the government in May, demanding that it comment on the petition first filed in 2002. Medical marijuana advocates now say they'll appeal the DHHS ruling to the courts where they hope to get a fairer hearing.