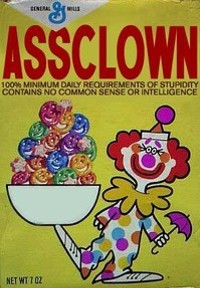 It's that time of the week again. Time to vote for the person whose words/actions brought them the most shame and humiliation this week.

1. Anthony Minor: The recently released ex-prisoner stole laundry detergent from a Hazelwood Dollar General this week with his girlfriend and their two young children in tow. Minor then sped away from police and crashed his car into a light pole, killing the mother of his children -- Lashonda White -- and leaving the kids and himself injured. Rescue workers say they pulled several bottles of detergent and fabric softener out of Minor's overalls while transporting him to the hospital.

2. Angry Veteran: His name hasn't been released yet, but a 57-year-old man from Centreville was arrested this week for shooting a 55-year-old man when a debate turned violent. The men -- both veterans -- were arguing over which branch of the military is better.

3. Natasha Martin and Carlyle Curry: The couple nicknamed the "Ding Dong" bandits, were arrested this week on charges that they robbed a St. Louis Hostess Store on multiple occasions.

Vote for your favorite below...