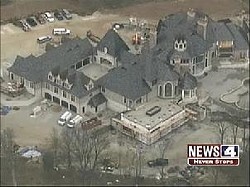 The company that sells extended auto warranties has been under attack since last April when the Better Business Bureau announced that it had received more than 33,000 inquiries and more than 1,100 complaints expressing dissatisfaction with the company or its services.

According to an excellent article in today's Post-Dispatch, the owners of the company -- brothers Darian and Cory Atkinson -- each borrowed tens of millions of dollars from the firm to fund their lavish lifestyles. For example, US Fidelis paid the mortgage and other costs for Darian Atkinson's outrageous, $17-million home in Lake St. Louis.

Company President Darain Atkinson, 45, owes the company $28.2 million; and Vice President Cory Atkinson, 40, owes $20.5 million. It's not clear whether those amounts are separate from each brother's $25,000 weekly draw or the large disbursements made to keep them in comfort.

Often, the company simply provided cash. Darain Atkinson got $500,000 on April 30; Cory Atkinson received the same amount as a cash advance on May 8.

Meanwhile, the brothers also spent lavishly on the company's Wentzville office that recently employed 1,100 people but not has just over 100 workers. Those purchases included a custom rug with the US Fidelis logo and a "cash machine" (see video below) in which top-selling agents could enter and grab as much money as possible.