Celebrated for his succinct, eternally absurd one-liners onstage, Steven Wright can also speak endlessly and frankly about the creative process of stand-up. 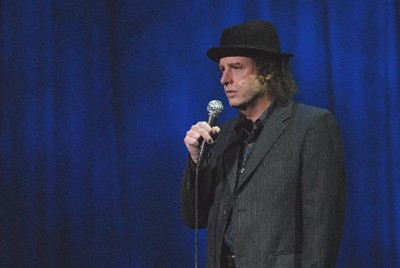 And though his resume boasts two Grammy-nominated albums, an Oscar-winning short film and the number 23 spot on Comedy Central’s list of the 100 Greatest Stand-Ups of All Time -- not to mention unwittingly founding the entire alt-comedy movement -- the comic-actor-writer proves himself to be decidedly down to earth and happy to stay that way...at least until the aliens show up.

It’s been a year and a half since [2007 DVD] When the Leaves Blow Away and you’re still constantly touring. Are you big on writing new material? How much have you come up with?

When it pops into my head I write it down, then I go on the road I try out the ones I like the best. But I haven't been constantly touring. I've just been doing casual amounts. I'm doin' it but backing off a little bit. I've been on the road for many years and I just wanted to have a phase where I didn’t go out as much. I’ll probably pick it up again…maybe.

With 20 years between albums, have you seen your material evolve over time?

I don’t really have a plan. There's been so much material, but it's still the same surreal, abstract, weird one-liner thing. I connected them into stories when I first started doing it, and then I started doing that again about eight years ago. So some of them stay as one-liners and some are connected into these weird stories, but I don’t think it's evolved into a different style or anything. I don't think about it that much. I just think, "Oh, that might be funny," and I write it down. It's kinda an automatic process.

I’ve always wondered what your set list would look like. Do you actually have chunks that you map out? I can’t even imagine how the one-liners would organize up.

As a matter of fact, I was just looking at the setlist 'cause I haven't done a show for awhile and I've start getting the show back into my head. One or two words will represent a whole joke and then a couple words might represent a three-minute story, but most is one or two words for each joke. It’s a long list.

A lot longer than most others', I would imagine.

And I used to not even have it in an order. Now I like to know the exact order I'm gonna do before I go out onstage. I used to kind of pick it off the top of my head; my head had all these jokes like a Rolodex. But then it got to be so many jokes that it just got out of control. To me it's like a play in the sense that I know where it's going. From the audience's point of view I change the subject every five seconds, but I know the whole 90 minutes in a row. Which makes it better because I can perform it better. I don't have to be doing an accidental memory test during the show.

This being your first show since June, is there any particular head space you have to get yourself back in? If you're doing shows every single night I think it'd be a little less prep work, or can you just get up there like no time's passed at all?

It is easy to do it when you’ve been doin' it right along. But these first couple of shows, I think they’re actually better for the audience. There's an edge. Being rusty has two sides to it. You're a little bit rusty, but on the other hand, it's almost more real because you’re not on any automatic pilot at all.

A little more of-the-moment, flaws and all. More organic.

Yeah, exactly. I always think that the first shows of the tour are best. It's better, from the audience's point of view, than seeing the end of a tour. It almost gets too tight, like a band that’s too tight. You know what I mean?

I guess that's when you could just throw the whole set list out the window and fly by the seat of your pants again.

I'm not that dangerous of a guy. I don't know how people make stuff up off the top of their head up there. I really admire that. I'm like a writer and I present what I've written. I mean, I am a performer too, but I can’t write up there. I just can't do it.

Not big on the crowd work, huh?

No, I just want to get in and out without being damaged. [Laughs]

Is there an overall creative goal you have in mind? Definitive direction you're actively heading toward as an artist?

I made two short films, but I’d like to do a full-length movie sometime. I’ve written pieces of a project, but it’s not anything to the point for me to talk about. I’ve pretty much done most everything I wanted to do except that. I have a film part of my mind, and then a stand-up part. And I paint, too, and I write music.

Anything else you want to tell the St. Louisians?

I remember playing St. Louis and doing an interview, like, 20 years ago and telling the interviewer that I thought that Arch was a big thing where a UFO could come along with a big cable and a hook on the end and just hook onto that Arch and pull the earth into another place in the universe. I remember seeing a movie on how they made that, a documentary film when I was in high school. They started from both sides, went up and then met in the middle. It was fascinating.

You’ve got to top it off with that piece right in the middle. Takes some planning.