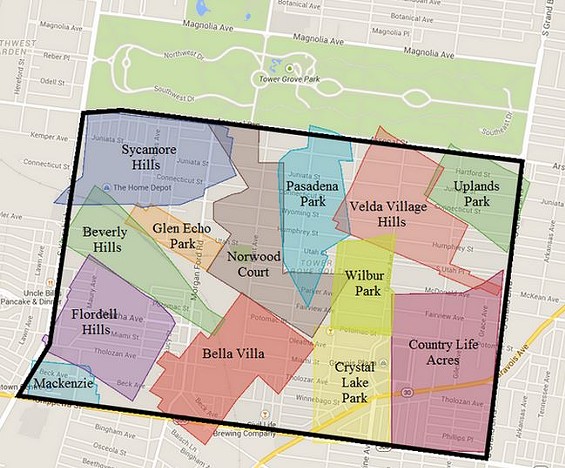 This is how many St. Louis County municipalities fit in a south St. Louis city neighborhood without changing the area or directional orientation.

Ever since protests erupted in Ferguson in August, experts have been pointing to St. Louis County's unique political geography as a root cause of the unrest.

Nearly all of St. Louis County's 90 municipalities come with their own elected officials and police forces. Even small local governments need money to operate, so the municipalities draw 20, 30, sometimes even 40 percent of annual revenue from petty fines and fees paid to their municipal courts by residents busted for traffic offenses, noise violations and other minor crimes.

Even after reading (and reading and reading) how St. Louis' scores of municipalities contribute to a suffocating legal landscape -- especially in mostly black north county -- nothing drives the point home more than this map, created by Tod Martin, a city resident and the deputy chief of staff for Senator Claire McCaskill. 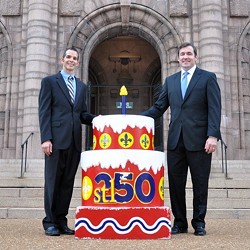 Martin decided to see how many municipalities would fit in his neighborhood, Tower Grove South. The answer? Thirteen, maybe more.

"If I rotate the municipalities and modify their borders without changing the area of each, fifteen St. Louis County municipalities fit into TGS," Martin writes on Facebook. "One municipality -- Glen Echo Park -- fits into two blocks of Arsenal and Hartford [streets] with room to spare."

See also: "This Is What Jim Crow Looks Like": A Day in North St. Louis County Courts

About 13,300 people live in Tower Grove South, a south-city neighborhood covering fewer than 1.5 square miles bordered by Arsenal Street, South Kingshighway Boulevard, Chippewa Street and South Grand Boulevard. Martin says the population of the municipalities in his map adds up to about 6,500 people.

Why is this an issue? Martin explains:

"If Tower Grove South were a St. Louis Co. municipality, we would ticket speeders on Arsenal, Chippewa, Kingshighway, Grand, and our little portion of Gravois. We would have our own court system to hold those speeders accountable and would use our huge windfall to fund our own police force," Martin says.

Play around with the map on Google Maps here.