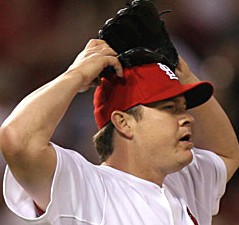 Jason Isringhausen
With a scant twelve minutes to go in the third period last night, it looked as if all was well in Bluesland. The Note found themselves up 3-2 over the Vancouver Canucks, thanks to another strong showing by goalie Chris Mason, as well as goals from Steve Wagner, Brad Boyes, and Keith Tkachuk. All they had to do was hold on for a little more than half a period, and victory, as well as two badly-needed points, was theirs.
And that's when it all started to go downhill.

By the time those last twelve minutes had ticked off the clock, the Blues had given up four goals, one an empty-netter by one of our former heroes, Pavol Dimitra, en route to losing by a final score of 6-4.

What really hurts, more than just this game, is that in that one half of one period, the Blues essentially lost a four-point swing. Vancouver is one of the teams that the Blues are chasing in the Western Conference. Gaining two points on them would have been huge. Instead, not only did the Blues fail to add those two points to their own total, they lost two points worth of ground to the Canucks. All in twelve minutes.
Watching this utter collapse, I was forcibly reminded of several different occasions this past summer, when we were forced to watch the Cardinals suffer a similar fate. In fact, one game in particular comes back to me; it was Chris Carpenter's homecoming. I wrote the next day of a shit tornado that blew in during the ninth inning, and that's approximately how I felt watching the Blues' lead evaporate -- and that's putting it really, really nicely -- last night.
So I started thinking, we need to bring a phrase into our lexicon to describe this particular situation. Old folks occasionally talk about watching your basket of eggs when you're in sight of home. I like it, but it isn't really all that succinct. No, what we need is something simpler. Something catchy. Something that, whenever someone just up and fails miserably when they have the finish line in their sights, people everywhere will immediately think of.
I suggest that we make it "Pulling an Izzy."
I know, I know. It isn't quite as catchy as, "getting Munsoned" or, "pulling a Homer." But I think that if we give this some time, it could really catch on.

What's that you say? It's mean-spirited and spiteful to name something bad after a player, especially one who gave it his all, even when he was too hurt to be doing so? Well, I disagree. I think this is just the way to ensure that Jason Isringhausen achieves true sports immortality. No, wait. Forget sports immortality. How about cultural immortality? And let's face it, folks: that's just not the sort of thing you bestow on just anyone.
If you're not comfortable with using Izzy's name for the thing, we could always make it a number, I suppose, make it like a combo meal. Call it a number 08.
Ah, screw it. That just doesn't work. No, it needs to be an Izzy, and it needs to be now.
Oh, and in case I haven't mentioned it before, the Blues need to GET A FUCKING GOALIE!!!!!! Seriously.