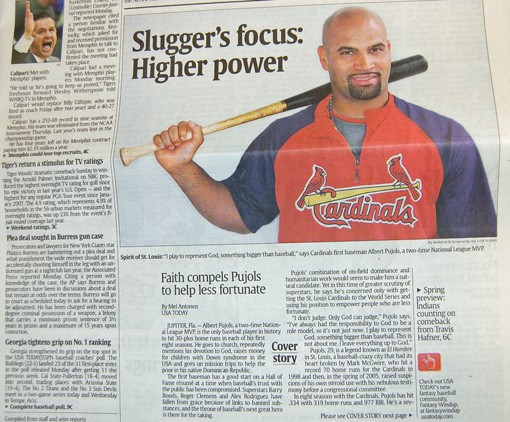 Albert Pujols has opened himself back up to the media in recent weeks, first with a Sports Illustrated profile earlier this month, and out today, a sports section cover story in USA Today.

The profile of the slugger covers the regular bases -- his devotion to God, the poor in his native Dominican Republic, his generous support for children with disabilities and the "black cloud" of steroids that hangs over major league baseball.

The most conspicuous connection between Pujols and steroids is the now-infamous "leaked" version of the Mitchell Report that incorrectly included Pujols' name as a steroid-user.

That erroneous version of the Mitchell Report -- reported on hours before the real McCoy came out --  included Pujols. This was all reported as fact by at least one TV station in town, and and mentioned by this paper.

In the profile of Pujols out today, the slugger recalls that experience, as told by reporter Mel Antonen:

Pujols is still steamed that he and his son, A.J., then 6, watched an erroneous report from a St. Louis TV station that said he had been named in the report hours before its release.

That TV station, as you might remember, was KTVI (Fox 2.) El Hombre certainly didn't forget -- he then memorably banned reporters from the station from a press conference.

Although the USA Today story feels like an abbreviated newspaper version of a longer profile in Sports Illustrated, it does provide new anecdotes about his early life, in addition to the now familiar stories of Pujols' very modest upbringing in the Dominican Republic. Read the full profile here.
© 2023 Riverfront Times