Cardinals Should Stay Away from Rockies' Slugger Matt Holliday

The Internet has been positively atwitter ever since yesterday morning, when it was reported that the Cardinals are apparently interested in trading for Brian Fuentes and Matt Holliday from the Colorado Rockies. There's been a ton of discussion all over the place, such as here (Viva el Birdos) and here (Future Redbirds).

On the surface, the deal seems to make some sense. The Cardinals could certainly use some help of the left-handed variety in the bullpen, which Fuentes would certainly provide, and another power bat for the middle of the lineup couldn't possibly hurt. Unfortunately, the surface of the thing doesn't really tell us much of the real story.

This would be a terrible deal for Cards GM John Mozeliak to make, and I'll tell you why. 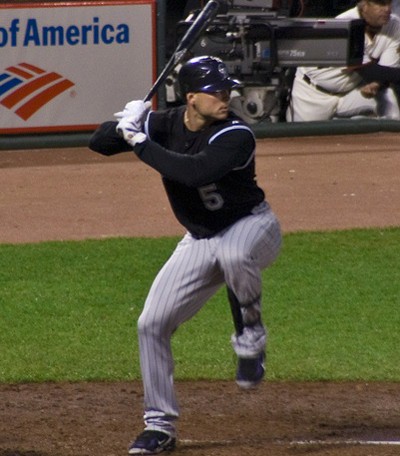 Let's set aside Fuentes entirely for a moment. Trading for him would undoubtedly cost the Cardinals some pretty solid talent (just look at the haul the Padres got for Scott Linebrink last year), but the guy is a lefty reliever. The type of deal we're talking about for him is on a relatively small scale. You can argue either way on trying to acquire Fuentes; the real difference-maker here would obviously be Holliday. So, for the moment at least, let's focus just on him.

First off, Matt Holliday is a very, very big fish. He's been in the running for the MVP award each of the past few seasons. Any package you put together for a player of this caliber is going to start with the name Colby Rasmus, and go from there. You'll probably have to include at least one of the Cardinals' top pitching prospects, such as Jaime Garcia or Jess Todd then round out the package with about two lesser prospects -- maybe a Jason Motte, the fire-balling righty reliever in Memphis, and Jon Jay, a center-fielder who's a notch or two below Colby on the depth chart. That's four players, all young, cost controlled, talented players, for one guy. Look at it this way. If the Cardinals simply went year to year on each of those guys without signing any of them to a longer contract, that's still 24 years of cost-controlled performance from that group.

Second, Matt Holliday just happens to be a Scott Boras client , and a free agent after the 2009 season. He's owed $13.5 million next year as well. So, that's the prorated portion of his $9.5 million salary from this season, plus the $13.5 mil from next year, after which he tests free agency and gets paid like Manny Ramirez.

Scott Boras clients don't sign long extensions before their contracts are up, so don't even go thinking the Cards could pull the old swap 'n' sign the way they did with players like Jimmy Edmonds and Scott Rolen. I'm not trying to put the guy down for having Boras as his agent, but you have to face facts. Boras clients just flat out don't do certain things, and bypassing free agency is right at the top of the list. (All salary information is from Cot's Contracts.)

Third, Matt Holliday is at least somewhat a product of his home ballpark. Coors Field is no longer the hitter's paradise it was just a few seasons ago, owing to the effects of the Rockies' humidor and all, but it is still a definite hitter's park. Holliday's home/road splits are ridiculously pronounced; he currently carries a 1.051 OPS, (on base plus slugging percentage) at home, versus .867 on the road. For comparison's sake, Ryan Ludwick's OPS this season is .932. Don't get me wrong, an .850+ OPS isn't anything to sneeze at, but that's not the sort of production you trade away the farm for.

Now, someone may throw Holliday's numbers at Busch Stadium at you, claiming that he is, if anything, an even better hitter here than he is in his own home park. Please, everyone, don't believe that for a second. Holliday does have ungodly numbers at Busch -- a 1.350(!) OPS -- but I have to wonder just how effective he would be hitting in Busch if he weren't facing Cardinal pitching. I'm sure there are hitters who do just flat-out love certain ballparks, but I also have a hard time believing the park matters more than the pitcher being faced.

What it comes down to is this: If you're looking to trade for Matt Holliday, you need to be prepared to give up your top prospect, one of your two best pitching prospects, and probably two other mid-range guys. You also need to be prepared to get the Matt Holliday who hits in all the other National League ballparks, rather than the one who currently plays 81 of his games in Coors Field.

You know, I think it's interesting that -- just yesterday -- I was writing a piece on the return of Mark Mulder and all of the baggage that came with it, and today we have a very similar situation being discussed. In both cases, you had a team that felt it was, perhaps, just one piece away from something truly special. In both cases, the player being considered is a younger, top-of-the-heap veteran who would seem to be an ideal target.

Both players -- Holliday and Mulder -- come with some warning signs: Mulder with his declining velocity and peripheral stats in '04; Holliday with the alarming numbers away from his home park. Both packages to be sent away include a player who is, quite possibly, roughly comparable to the player to be acquired, the only difference being that whole label of being ''proven.'' And in both cases I think the player being dealt away will likely prove to be the better player over the long haul.

Come on, Mo. Don't pull another Haren for Mulder. There's plenty of reason to believe that Matt Holliday will out-produce Colby Rasmus with the bat over the next six years. However, those six years will cost the team not only the six years of Rasmus you would dealing away and the $100 million or so it would take to sign Holliday for those years, but also six years of cheap performance from the other three players you would probably have to add in to get the deal done.

This team is moving in a really great direction. Don't get greedy and throw that all away, Mo.

Just say no to the Holliday Road.