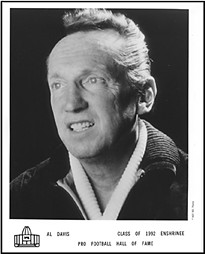 Pro Football Hall of Fame
Davis' steel-jawed grin during his photo shoot for his 1992 NFL Hall of Fame induction.

The biggest shock of this weekend's NFL draft was the performance of the Oakland Raiders. (It might not have been quite as huge a shock, given that Al Davis, the longtime owner of the Raiders, may have lost his mind by this point.) The Raiders' first-round pick was surprising enough, when Davis declared the Raiders were taking Darrius Heyward-Bey, projected by most as the third- or fourth-best wide receiver in the draft and a late first rounder, at  Number 7 overall. The real shock, though, was still to come.

With their second pick, the Raiders selected Michael Mitchell, a defensive back out of Ohio University, and the reaction throughout the land went something like this:
"Who?"
Hell, even Kiper and the draft guys were shocked, almost to the point of speechlessness. (Which, by the way, was perhaps the best two minutes of the entire draft.) They talked about a couple of teams considering signing this kid as an undrafted free agent following the draft, maybe a team taking him in the seventh round, but a second-round pick? Absolutely insane.
But wait, come to find out, there may have been more to the story! The Bears may have been targeting Mitchell at Number 49, and several other teams were at least showing some interest. So maybe Al Davis isn't quite so crazy after all...
No, I can't back that up. Al Davis is still batshit insane, regardless of how this whole thing works out.
Either way, though, take a look at the tape and decide for yourself. Mitchell may not have been on too many draft boards, but we all know that when you want something in the modern world, there's only one place to go for it: Youtube. Mitchell does have a couple of videos on the 'tube, and he is mighty impressive in them.
I will warn you: the soundtrack to the one is just absolutely brutal. If you have a mute button, you may want to use it.
© 2023 Riverfront Times