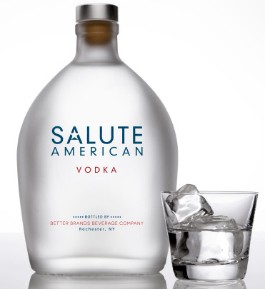 Chesterfield-native (and Chaminade alum) Pete Kelly spent the better part of the past twenty years working in the global marketing industry, working for firms in St. Louis, New York and Chicago. In 2008 he founded his own marketing agency, Situ8, in Chicago. And this past year, Kelly founded Better Brands Beverage Co., a Midwest-based, for-profit company with a mission statement to invest in U.S. veterans through a line of American-made liquors, with $1 for each bottle sold donated to veterans' charities.

Its first offering, Salute American Vodka, debuted in Missouri on January 4 -- before hitting shelves elsewhere across the country. Made with corn and wheat grains grown in the Midwest, the 80-proof vodka's already been awarded a silver medal by the Beverage Testing Institute in its "Best Value Vodka $20 and Under" category.

Gut Check caught up with Kelly to learn more about the vodka, how it supports U.S. veterans and, perhaps most relevant our interests, where we can buy the stuff in St. Louis.

Gut Check: Your background is in marketing. What spurred the decision to launch a line of liquor products?

Pete Kelly: In June 2011 I met some folks who had started a veterans' charity. They were looking for a way to raise funds to help women and men who come back from serving reintegrate into society. Find a job, go back to work, start a business, whatever it might be. I was doing some pro bono work for them and we came up with an idea: What if we looked at the Newman's Own business model -- the people who make salad dressings for charity -- what if we did that for veterans as the focus of a charitable contribution?

And I have a background in the spirits industry. I worked in marketing for a couple different major clients, so we started looking at that business model and that's how the whole thing started. We developed our first brand, Salute American Vodka.

GC: At the heart of your company Better Brands Beverage Co. is a focus on giving back to and supporting veterans. Did that influence product production?

Kelly: Two important things that we felt very strong about: One, everything has to be made in the U.S.A. If we're supporting our local economy, if we're supporting veterans, we've obviously got to be making the product in the U.S.A. That was the first thing. The second thing was being totally transparent with our contribution to charities. We looked at, should it be a percentage of profits...at some point that becomes nebulous to consumers. We drew a line in the sand and said $1 [a bottle goes to charity], forever. It's not a promotional window, it's not if or when we make money, it's $1 a bottle. That's what the business model is based on.

GC: Any significant bumps or lessons learned along the way?

Kelly: We spent almost two years in development. A lot of brands, when they come out, they'll buy a stock bottle. We didn't want to do that because the vodka category is so crowded, so we had to find something our own. We landed on the idea of doing a custom canteen. [The vodka] bottle is actually modeled off of a 1945 Army-issued canteen. We had it custom done and it's produced in Park Hills, Missouri. It's very hard to find glass manufacturers that actually produce in this country. It took us a long time to find the right partner to do it. Most of it is done overseas. That's a unique feature of the brand.

GC: Of all the spirits to choose from, any particular reason for choosing vodka?

Kelly: It's the biggest category, number one. It's the biggest volume category, it's the biggest revenue-producing category. Vodka has a nice male-female split. It doesn't skew hard one way or another. Whiskeys and bourbons traditionally skew a little more male, though that's changing a bit. We wanted something that would appeal to a broad group of people because we thought we could create our own little niche within a crowded category. The nice thing about vodka, too, is that it's very versatile. You can mix it with so many different things and make great drinks with it. Or, our product, you can drink straight on the rocks.