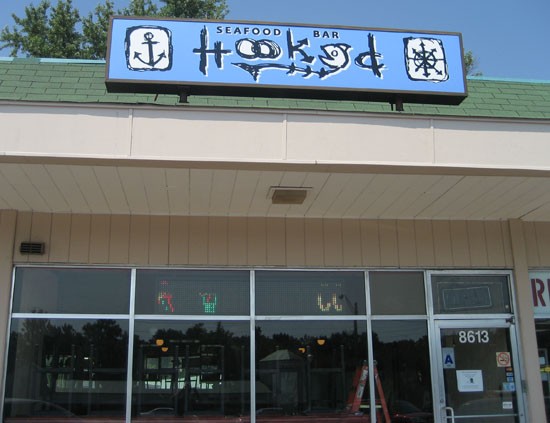 "It's small enough to do something where it'd be a hole-in-the-wall, niche restaurant," general manager Tuyen Hua says. "I wanna make it a gritty feel. I wanted it to be clean, but at the same time have that rugged feel like a pirate ship or a New England dock."

Despite being in land-locked St. Louis, Hua is taking advantage of being so close to seafood distributors Bob's Seafood and Seafood City on Olive Boulevard. He hopes to erase any negative preconceived notions about local seafood.

Hooked will feature sandwiches such as po' boys during lunch and an assortment of seafood during dinner, as well as non-seafood proteins and vegetarian options. Instead of focusing on one particular region, such as Cajun or New England, Hooked plans to offer a variety of options. For those dining at the bar or looking for a quick snack, Hooked will feature appetizers that go "hand in hand" with the main menu.

Hua is especially excited about quality crab legs ("Not the wholesale crab legs that they get for the all-you-can-eat places...Something that's not too briny and actually tastes like crab," he says) and a perfected paella recipe ("I'd like to bring some southeast Asian spices in there").

Hua is confident the restaurant will open soon, but it depends on getting the proper city and state licenses. One hangup has been Hooked's liquor license, which is currently being sorted out at the state level. "I've been expecting to open up a month and a half ago. Every week it seems like the city says, 'Another week, another week,'" he wearily says.

"We're ready to open, but I can't open the restaurant without that liquor license. I mean, after all, we're a bar. What's the point of opening a bar without a liquor license?"