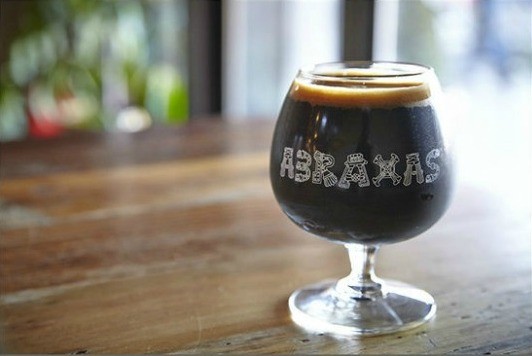 The much sought-after Abraxas. | Steve Truesdell

St. Louis beer fans once again converged on Perennial Artisan Ales (8125 Michigan Avenue; 314-631-7300) on Saturday as the brewery staged their first ever Abraxas Day. This year marks the third year Perennial has released the highly acclaimed Mexican chocolate stout, but the first time they made an event of its release. In addition to the event's namesake beer, the brewery also released Coffee Abraxas - a special variant only available at the brewpub made with coffee from local roaster Sump Coffee (3700 S. Jefferson Avenue; 917-412-5670).

The excitement began building on October 23 when Perennial sold tickets to two VIP sessions for the release. For $40, ticket holders were promised an Abraxas snifter, guaranteed ability to buy one bottle of Coffee Abraxas without waiting in line, and four ounce pours of nine special beers (Coffee Abraxas, 2012 Abraxas, and seven out-of-state beers unavailable in the St. Louis area). All 110 tickets sold out within 40 minutes. Come Saturday morning, eager fans unable to procure a VIP ticket (and a few VIP ticket holders looking to score a second bottle of the coveted Coffee Abraxas) began lining up outside Perennial. The brewery didn't open until noon, but fans brought their own bottles of beer to share and began opening them around 6 a.m.

Gut Check arrived slightly before noon to find about 100 people in line. Many noshed on complimentary Mexican chocolate doughnuts provided by Strange Donuts (2709 Sutton Boulevard) or ordered from the Completely Sauced food truck, whose menu included two special dishes -- a carbonnade made with Abraxas beer and beignets topped with an Abraxas-infused whip. Empty bottles covered one of the larger picnic tables outside the front door.

At noon, the Perennial doors opened, and the line began moving. The Coffee Abraxas bottles not reserved for VIP holders sold out within an hour and 40 minutes. Abraxas fiends could still wait around until 3 p.m. for the draft version to go on sale, though.

Purely in the name of science, Gut Check ordered an Abraxas to determine if this year's batch lived up to its hype, and we're happy to announce it most certainly does. So black and viscous it almost absorbs all the light in the room, the beer has a tantalizing chocolaty, spicy aroma. It tastes mainly of cocoa and cinnamon with a touch of spiciness from the ancho chiles. The beer has a 10 percent ABV, but you can barely tell from the taste. You can certainly feel the effects of the alcohol after drinking one, though, so please be careful not to overindulge.

Gut Check also stuck around for further inquiry with the Coffee Abraxas. The coffee version has everything the base beer has, plus an amazing coffee aroma. You can also taste the coffee, but it stands out much more in the nose. We're not sure how much Coffee Abraxas Perennial made (it almost certainly sold out at the brewpub Saturday), but if it shows up on tap around town, Gut Check highly recommends that you seek it out.

Overall, Perennial did an excellent job with this release event. As a veteran of the BA Abraxas release last January, this Gut Checker was impressed with how smoothly the day went. While busy, the event did not feel hectic. This may have been due to the VIP sessions relieving some of the pressure from the lines, the earlier weekend opening time (versus the BA Abraxas weekday opening time of 4 p.m.), or the lower bottle limit. The biggest credit goes to the incredible Perennial staff, however. They learn a little more from each release, and their events keep getting better.