photo by Keegan Hamilton
Minerva Lopez is a Mexican superfan.

8:45 a.m., Carniceria Latino Americana.
And so it begins.
A full 45 minutes before the kickoff of the opening match of the World Cup, Mexico vs. South Africa, it takes some wrangling to find an open seat. The diehards have been here since seven o'clock, draping the patio's wrought-iron fence with Mexican flags and regalia.
Latino Americana has two flat-screen TVs at opposite ends of its shaded patio, but a frayed HDMI cable put one screen out of commission and left everyone at the side closest to Cherokee Street craning their necks to see the action on the only functional set. Half the crowd -- dressed nearly ubiquitously in the green or black jersey of El Tri, the Mexican national team -- are already deep into their first buckets of beer. (Carne asada tacos and Modelo Especial: The breakfast of campeones.)
When a tall African guy in an embroidered button-down shirt strolls in and takes a seat on the steps leading into the restaurant, Minerva Lopez, who own Gooolll, the soccer shop across the street, yells, "Bafana Bafana in the house!" -- a reference to the nickname of the South African squad.
She follows up with a shout for "Un applause for Sudáfrica!"
The crowd responds with a modest cheer.
"¡Y por México!" Lopez continues.
The crowd roars. The African guy shrugs and allows that his side probably doesn't have much of a chance.

photo by Keegan Hamilton
Lopez and the lone Bafana Bafana supporter
Lopez continues to play the role of jester and cheerleader, draping herself in a giant Mexican flag, donning a green velvet sombrero and teasing the few gringos in attendance with lines like, "You're welcome here as long as none of your cousins work for La Migra, the immigration."
Mexico dominates the match early on, keeping possession of the ball and nearly scoring on several opportunities, including a ball that hits the back of the net but is negated by and offsides. The crowd ooh and ahh and curse until the 55th minute, when South Africa's Siphiwe Tshabalala breaks away and hammers home a beautiful finish into the upper-left-hand corner of the net.
Silence.
The lone South Africa fan stands and puts a finger to his lips, the universal gesture for "shhhh." The Mexicans respond by belting out the "Ay-yay-yay" lyrics to the song "Cielito Lindo."
click to enlarge 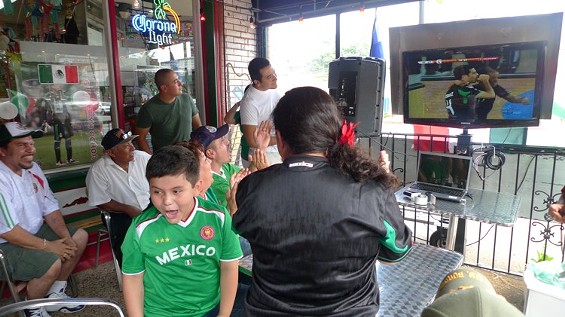 photo by Keegan Hamilton
Gooooaaalllll!
The chants return, fans pounding their tables or clapping to the beat: "¡Mex-i-co, Mex-i-co, Mex-i-co! ¡Sí se puede!" They even do la onda, the wave. Then, in the 79th minute, Mexico's Rafael Marquez blasts a ball past the South African keeper from pointblank range.
Everybody goes nuts.
The buckets of beer keep coming, the cheers get louder and louder, but both teams seem content to play keep-away and settle for the draw. South Africa does come dangerously close in the 90th minute, bouncing a shot on a breakaway off the goalpost (and nearly sending every Latino in attendance into cardiac arrest). When the ball bounces harmlessly away, all breathe a sigh of relief, finish their beers and pay their checks.

Los gringos support their neighbors to the south

El Tri survives a match it could have easily lost and South Africa looks comfortable playing the part of Cinderella. And, though it may have just been the effect of a copious amount of beer consumed before noon, both groups of fans seem satisfied with the outcome.