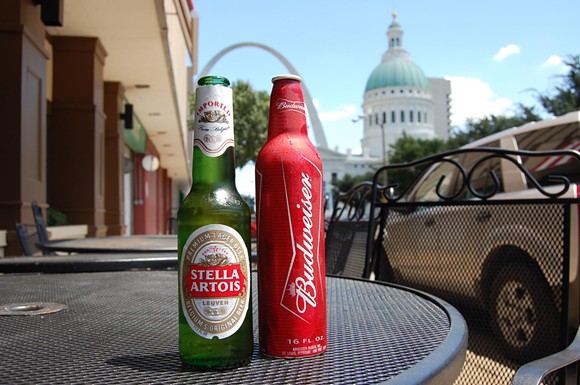 On the off chance you didn't hear the news last night -- or see the V-E Day-style headline in today's Post-Dispatch -- Anheuser-Busch has accepted InBev's $52 billion (or $70 a share) takeover bid. This creates not only the world's biggest brewer, but also a situation of some delicacy. What should be the flagship brand of the new Anheuser-Busch InBev, Budweiser or Stella Artois?

Never one to expound on a subject without immediate, first-hand experience, I headed down to the nearest bar and had a glass of each.

First, Budweiser. The King of Beers. It pours a pale straw gold with a foamy white head. A new keg, the bartender tells me. I take a sip. You know, I've never actually considered what a Bud tastes like. It just tastes like, you know, a Bud. Like the men's room -- though with a fresh urinal cake. Like Busch Stadium in the eighth inning on a hot, humid August afternoon. It has (now I'm reading the notes I wrote on p. 69 of the August issue of Food & Wine magazine) "a bready aftertaste...sour." Actually, it's not that bad. Thirst-quenching, as far as beers go. The finish is a little tart, kinda apple-like.

Second, Stella. "We've had over 600 years to get the recipe right," reads the ad copy conveniently located on the back page of the aforementioned copy of Food & Wine magazine. The Belgians, of course, having had nothing better to do in that time except 1) be invaded; 2) make waffles; 3) administrate the E.U. Stella wasn't available in St. Louis until a few years ago, when it suddenly appeared overnight like crabgrass, every bar in town seemingly sprouting a Stella tap, a Stella patio umbrella and a set of those Stella tulip glasses with the gold rim that flakes off if you scratch it or, if you're as easily confused as I am, if you sometimes try to chew your beer.

Thankfully, this bar doesn't have the fancy glasses. The beer pours maybe a touch darker than Bud -- though the light in here sucks, so maybe it's the same color. Hell, maybe it's blue? I'm drinking beer at 2 on a Monday. Things aren't exactly taking solid forms, OK? At any rate, Stella is definitely crisper than Bud. The flavor is stronger, I suppose, though forgettable. Kinda hoppy, kinda malty. A little bitter. A beer to drink, not savor.

So which should be the flagship brand of Anheuser-Busch InBev? I suppose Stella is the better beer, but neither is stellar.

Sorry. As I said, beer on a Monday afternoon isn't conducive to quality work. So Stella's a better beer. BUT. It's Belgian. And a six-pack is, like, $2 or $3 more than a six-pack of Bud. And its bottles are 11.2 ounces, because the Belgians use the metric system. Or something.

On the other hand, Budweiser has that classy label ("This is the famous Budweiser beer....") and, more importantly, the Clydesdales. Those fuckers could roll right over the Belgians.