A Table for How Many? at Gokul 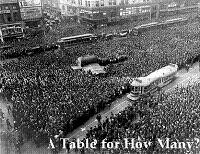 Stefani Pollack is the author of the food blogs Cupcake Project and Food Interviews. She is also a member of the St. Louis Dinner Club. She blogs about her large-group dining experiences for Gut Check.

When I called to make a reservation for dinner at Gokul, I asked about bringing a party of twelve. The person to whom I spoke expected a full house that night but was happy to accommodate our large party.

As soon as we announced the location, the reservations started rolling in. I could see right away that we would exceed twelve. After my husband sent out a reminder encouraging people to RSVP, we had a final count of seventeen. "It won't be a problem," said the nice man who recorded the updated number.

When we showed up, there was a big table set up for us -- big enough for seventeen. Then a new member who had RSVP'd for one showed up with his mother and child. Minutes later, I turned around and noticed two others who hadn't RSVP'd. "Eeek!"

The motto of our group is the cliché, "The more the merrier." We didn't want to turn people away, but if everyone else showed up, there clearly would be a problem.

As the rule-abiding RVSPers arrived, the restaurant added chairs to our table, and we all squished in, elbow to elbow. Since the restaurant was full, there was no way to add another table, though our server gladly added an extra table later in the evening after an adjacent party headed home.

Would we turn people away next time? We'll continue to try not to do so. Even though we were on top of each other, everyone enjoyed seeing new faces. Some even said that the proximity made the meal more intimate.

(Does anyone have any tips on how to encourage group members to RSVP?) 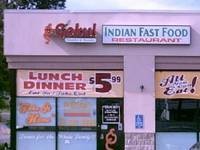 You can't beat a buffet for a group dining experience. It's so easy! People can get up and grab food whenever they are ready to eat. Separate checks are a breeze since everyone owes the same amount. The problem with buffet dining is that most dinner buffet options in St. Louis are bad. Go ahead: Try to convince me that any of those mega Chinese buffet places serve food that I want to eat.

Gokul, however, is a different story. They have an Indian dinner buffet every night, but it goes vegan on the first Monday of every month, which happens to be one of the nights that our group goes out. I wondered whether people would even show up for a vegan buffet -- only one person in the core group is even a vegetarian. But as you can see from the count above, people did not shy away from vegan cuisine.

I heard few complaints and tons of compliments about the fare at Gokul. A few lamented the lack of butter on the naan and the lack of chicken tikka masala, but that just goes along with the territory. Also, one member said that he was going to head home and cook some meat for himself because no meal is complete without it. Of course, this same member doesn't like any fruit -- not a single kind. We're lucky he even came.

Should You Go to Gokul?

Go, go, go! Go for an easy buffet experience with your group without sacrificing food quality. Go for the cheesy Bollywood movie that plays on the wall, sure to provide table conversation if there is a lull. Go on the first Monday of the month for the full vegan experience.
© 2023 Riverfront Times