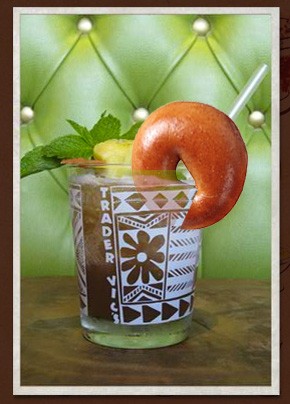 It has often been said that for a group that makes up such a relatively small percentage of the population, Jews have had a disproportionately huge impact. The world would be a different place without Jonas Salk and his polio vaccine, without Albert Einstein and Sigmund Freud.

The legacy of Jews in America starts with Christopher Columbus. We owe our very blue jeans, an item that vies with the American flag and apple pie for most emblematic of our culture, to Levi Strauss. And the world of comedy? Don't get us started.

Greater than any of these is the contribution of Yiddish words to the English language. Polio, schmolio. Sometimes a cigar is just a cigar, but if you're talking Groucho Marx, it's shtick. Pull out your dictionary, turn to the page with sch and marvel: schlep, schmaltz, schmuck, schvitz. These words are familiar, visceral. They don't so much describe as conjure the thing. Is there a phrase that conveys more pure joy than "mazel tov"?

Most of the time, there is no satisfying substitute for the Yiddish word. Schmutz. Plotz. The words sound like exactly what they're describing. Chutzpah. Kvetch. Kibitz. Schmooze. They're fun to say! Verklempt. Tuchus. Tchotchke. Meshuggah. Bupkis. They're guttural, spitty, consonant-laden, sometimes indelicate or even impolite. You use them for emphasis, when you wanna call it like you see it, not diplomatically dance around the issue.

The second-greatest contribution is the Jewish delicatessen. Kopperman's Delicatessen (386 North Euclid Avenue; 314-361-0100) is a kosher-style Jewish deli in the grand tradition, and has been since the turn of the century. (Not this one or the last one; the one before that: 1897, to be specific.) It offers all the genre standards: blintzes, latkes, bagel and lox, corned beef hash, knishes and matzo soup.

If you feel like sipping a mai tai with your pastrami sandwich, you can do that too. Kopperman's patio on Euclid Avenue is equipped with a ramshackle bamboo bar and tiki torches, and a sign that reads, "Tiki bar is open. Enjoy a classic island drink." Under the specialty drinks heading, the menu states, "The house rum is Pusser's British Navy, the Official rum of the British Fleet until 1970 when, due to cost cuts, the daily ration of rum was no longer issued to the Royal Navy."

Both the navy grog and the mai tai arrive in tiki mugs with a straw, a cherry, and a couple of wedges of pineapple speared on a fancy toothpick. Both are delicious, although we prefer the slightly less sweet mai tai. The drink's origins, and, for that matter, the precise recipe, are a subject of debate. A sign on the bar wearing a faded lei says Kopperman's makes its mai tais with "the famous Trader Vic's mix" and that the rum is 95.9 proof. To this last point we can attest.

If there is a connection between the Chosen People and rum-based drinks, we don't know about it. Where we grew up, in the far-flung suburbs, the only place to get a bagel is Saint Louis Bread Co., and if you order it with a schmear, they're going to look at you funny. So we're not an expert, but it seems random, like the vintage circus posters on the walls. In a world of increasing homogeneity, here's a place that embraces idiosyncrasy.

The sandwiches have names like Ike and Tina Tuna, Tongue Fu, Any Pork in a Storm and Cry Me a Liver. To get to the bathroom, which is in the basement, you head down a narrow flight of stairs to a dimly lit passage where you will see a sign with an arrow that reads, "Les Toilettes." This rye sense of humor (ba-da-bum!) is evinced in Kopperman's approach to customer service, too. There is a jar behind the counter labeled, "Ashes of Problem Customers."

One of St. Louis' most famous Jews, Joseph Pulitzer, recalled arriving here by train as a young man, "The lights of St. Louis looked like a promised land to me." That's exactly how we felt as a young suburban girl when we moved to the city. We get flashes of that wonderment with city life every now and again, like tonight. It's well past midnight on a Saturday night, we're sitting under the stars on a tree-lined street in the Central West End, having a nosh with a couple of friends, watching the nightlife go by.