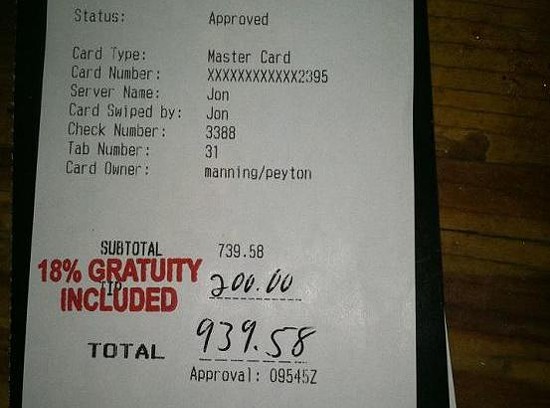 According to the receipt for the meal, which went viral yesterday, Manning left $200 on a $739 check, which already included a mandatory 18 percent gratuity.

So: Peyton Manning proves himself a generous guy -- which, as much as it pains me to admit as a native Baltimorean who remembers watching the city's mayor cry on television when the Colts sneaked out of town, doesn't surprise me -- and some lucky server named Jon pocketed a nice chunk of change.

Eure was livid when she learned about the check and said the server was immediately terminated. "This goes against every policy we have," said Eure. "It's just horrible."

We suppose that this should be a lesson to servers everywhere about posting any receipt, good or bad, celebrity or average Joe, online. But as a food blog that thrives on this kind of thing, we hope they don't learn from it.

As for the server in question, we recommend searching for restaurant jobs in the South Florida area. We suspect Manning will be tipping well there for the next few years.

(Here's the full receipt photo, in case you want to see Manning's signature:)