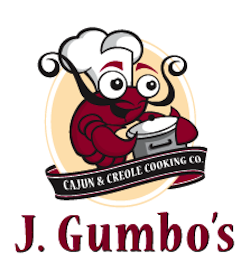 - Looks like another fast-casual chain is setting up shop in St. Louis: A trusted operative tells Gut Check that J. Gumbo's will open in the Central West End. (We have an exact address, but we're working to confirm it.)

J. Gumbo's, which as its name might suggest specializes in Creole and Cajun fare, has locations in six states: Illinois, Indiana, Kentucky, Ohio, South Carolina and Tennessee. The menu feature expected dishes (po' boys, jambalaya and, naturally, gumbo) as well as fast-casual conceits (wraps). More on the location and opening date as we learn it.

- Evan Benn of the Post-Dispatch reports that J. Spain's Waffles & Wings will open at 1901 Washington Avenue, the previous home of Smoking Joe's Bar-Be-Que.