Hobo With a Shotgun and Dinner at the Tin Can

A scene from Hobo With a Shotgun (pretty self-explanatory).

​Hobo With a Shotgun.

The title alone was enough to tempt us into watching a movie based on a fake trailer made for Quentin Tarantino and Robert Rodriguez's 2007 Grindhouse. This film almost immediately dives into 86 minutes of campy, ridiculously gory goodness, padded, of course, with cheesy one-liners and a strange friendship between the hobo and a hooker (which is the movie's attempt at including some sort of heart tenderness sentimentality?).

Rutger Hauer stars as the nameless hobo who drifts into town via freight train only to find the place littered with crime, prostitution and violence, most -- if not all -- perpetuated by the terror of the town, head thugs Drake and his two skeezy sons, Slick and Ivan. Hobo just wants to go about his own business, but the town's horrific predicament is too much for our hobo hero to ignore. So, along with his trusty shotgun, he takes it upon himself to rid the streets of its trash, blasting one scumbag at a time.

It's difficult to pin-point which is the biggest offender in this movie: the acting, the script or the insane amount of blood and guts that often splash against the screen. Then again, it's the movie's goal to be over-the-top with its hardcore gore. Hell, it begins with showing off creative beheading methods.
That pretty much sets the tempo for the rest of the flick.
But what was probably more cringe-worthy than all the beheadings, blowing off balls with a shotgun and slicing off body parts was the relationship between the Hobo and the hooker. It was like a weirder version of Beauty and the Beast.
Hobo is so ridiculous that it's difficult to maintain that squeamish feeling because you'll probably be too distracted by the stupid shit that comes out of the characters' mouths. And when it doesn't seem like things can get any stranger, they do. The villians that are thrown in throughout the movie get progressively more outlandish, to the point where you'll likely be thinking, What the fuck...?? What the hell is that Iron Man/Optimus Prime-looking thing supposed to be (just to be clear, it's on a much smaller scale than O.P. IMDB lists the estimated budget as $3 million. This is almost harder to believe than the acting)?? 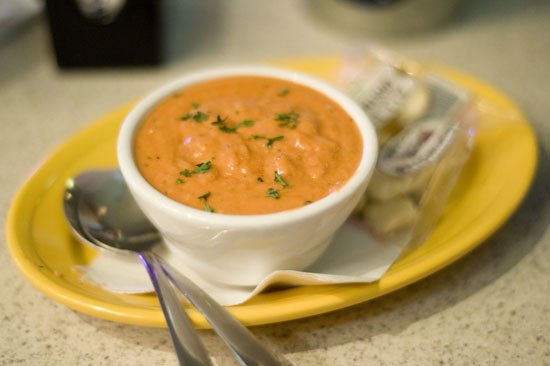 Kholood Eid
Sweet tomato bisque
​At least dinner was good at the Tin Can Tavern (3157 Morganford Road; 314-865-3003). Or at least it started out so. We made the same mistake the movie made, in thinking that more is, well, more. Beginning the meal with a cup of the sweet tomato bisque was the best decision of the night. Thick and creamy and served with a bag of crackers, the soup triggered memories of eating those canned SpaghettiO's -- but much, much better. The soup was simple enough to be more satisfying than expected.
After that, you could say we over-ordered.

Kholood Eid
Chicken Philly
​The Chicken Philly, marinated chicken pieces with sauteed onions and mushrooms, smothered in provolone cheese, all atop a toasted sesame hoagie with a side of seasoned fries. And just to be safe, a second sammich was ordered (sharing is caring, after all). The Firecracker, a small chicken breast drenched in the housemade buffalo sauce, topped with pepper jack cheese and served on a bun. We opted for the signature mac & cheese as this dish's side.
And finally, a separate side order of hush puppies.

Kholood Eid
Hush puppies
​After the sandwiches, the meal became too heavy. The fries needed dipping in ranch to dilute the overwhelming amount of Cajun-flavored seasoning. The mac & cheese first intrigued us, with its hint of sweetness. (It tasted closest to sweet potato, but our guess was shot down by an employee there -- the recipe remains a secret.) But after a few bites, and paired with so much other food, it left us feeling a tad on the nauseous side (more so when we thought it'd be a good idea to heat up the leftovers a few hours after getting home for our instant streaming Netflix night with Hobo).
Turns out, some things really are better in moderation. The meal and the movie could've been toned down a bit, but that's not how we roll as a culture. And the movie, again, was based on a fake trailer. It's not supposed to be good. Just mindless entertainment, meant to satisfy the viewers' thirst for blood. Instead, it gave us much more than we bargained for, and in this case, it was too damn much.
© 2023 Riverfront Times