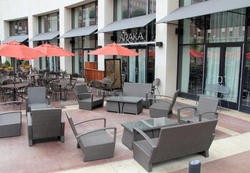 As we learned yesterday, Araka (131 Carondelet Plaza, Clayton; 314-725-6777) will close after service on Saturday, March 9, ending a five-and-a-half year run for the upscale Clayton restaurant. Gut Check spoke with owner Brad Beracha about the decision to close Araka and what might be next for the restaurateur, who shuttered his other venture, Miso on Meramec, just last month.

"There were multiple things going on," Beracha says of the decision to close Araka. "The size of the space, as many as seats as we had, a location [in Clayton] that did not turn out to be what it was supposed to be [when the restaurant opened] in '07.

"We really thought we were on an island over there, with a very tough parking scenario," he adds. "With 380 seats and the volume [necessary] to pay the overhead, financially I felt like it was nearly impossible to continue."

Beracha will remain occupied with Araka business through the month of March, as he tries to broker deals to sell what he estimates to be $1.5 million in materials that will be removed as part of the space's renovation into a new restaurant, 801 Chophouse.

After that, he says, "I am going to step back to take a breather."

"It's just the next chapter for me," he concludes. Araka, he admits, became a "very difficult project" once the "honeymoon" of its opening and positive reviews had passed. "There's a sense of relief that I'll probably enjoy more when there's some distance."