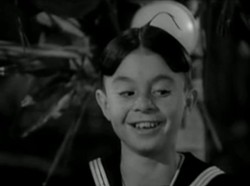 Image via
Even Alfalfa is smiling about yesterday's ruling on alfalfa.
Gut Check hasn't read much case law since our high-school debate career ended and our briefcase (and trophies!) went into storage in our parents' garage. However, we were fairly certain that when the Supreme Court issued a ruling, one side came out the winner, the other the loser.

Not so, it seems, with the court's ruling yesterday in Monsanto v. Geertson Seed Farms.

Now, reading headlines in the major papers, you'd think the 7-1 decision was a clear victory for St. Louis-based Monsanto.

So why did Andrew Kimbrell, executive director of the Center for Food Safety, which is a party to the original lawsuit against Monsanto's genetically modified alfalfa, write a blog post for the Huffington Post entitled, "Supreme Court Case a Defeat for Monsanto's Ambitions"?

First, some background. In 2005, the USDA approved Monsanto's alfalfa seeds, which had been genetically modified to resist the company's widely used Roundup pesticide. In 2006, a group of various activists, farmers and others sued the USDA over its decision on the grounds that the government agency hadn't studied the seeds' potential impact on the environment.

In 2007, U.S. District Court Judge Charles Breyer (brother of Supreme Court Justice Stephen Breyer, who recused himself from this case, hence the 7-1 tally) issued an injunction that banned anyone from planting them until the USDA study had been completed.

It was this injunction that Monsanto appealed all the way to the Supreme Court, whose ruling the Los Angeles Times summarized thusly:

The high court ruled that a federal judge in San Francisco [Charles Breyer] went too far when he issued an order that overturned the Agriculture Department's decision to allow some farmers to plant Monsanto's Roundup Ready alfalfa seeds before the government had completed its full study of the environmental issues. The plants are resistant to the company's herbicide. An appeals court upheld the ban.

To simplify, the Supreme Court had less to do with Monsanto's genetically modified seeds than with the legal squabbles surrounding those seeds. Hence the response from Kimbrell of the Center for Food Safety:

In other words, the injunction was "overkill" because our victory in lower federal court determined that USDA violated the National Environmental Policy Act and other environmental laws when it approved Roundup Ready alfalfa. The court felt that voiding the USDA's decision to make the crop legally available for sale was enough.

Still, the Wall Street Journal suggests that even allowing for such a technical interpretation of the ruling, Monsanto has regained the advantage in this dispute:

Justice [Samuel] Alito said it was possible the Agriculture Department could allow the interim planting of Roundup Ready alfalfa in isolated ways that would pose no threat to conventional crops. He also said that if the department chooses to allow interim planting while it completes an environmental study on the Monsanto seed, the plaintiffs can then go back to court and challenge the agency's interim actions.

It appears likely that the Agriculture Department will again clear farmers to plant Roundup Ready alfalfa. [Emphasis added.] After losing in the lower court, the agency analyzed the potential environmental impacts of the herbicide-tolerant seed, and issued a draft environmental impact statement last November, again recommending that farmers be allowed to plant it. A final agency action on the seed is expected by next spring, which could prompt a new round of litigation

In other words, once you cut through the overreaching headlines and the overheated spin from both sides, yesterday's ruling was merely one more step in the very long and very contentious battle over genetically modified food. Stay tuned.