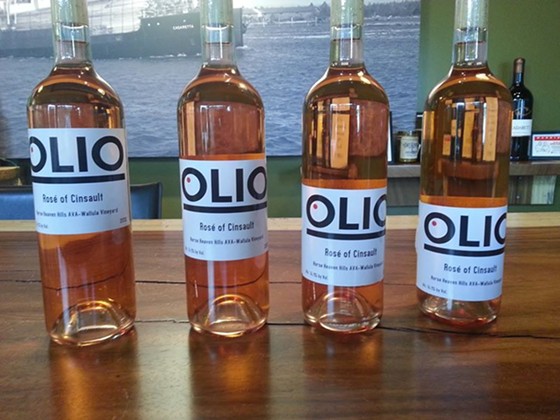 For this week's review, I visited Bocci Bar (16 North Central Avenue, Clayton; 314-932-1040) in Clayton, the latest concept from Frank Schmitz, whose other restaurants include Coastal Bistro & Bar and BARcelona. Though I was underwhelmed with Bocci's menu revamp, the wine bar's extensive selection of quality rosé wines was impressive. Soon after dining at Bocci, it seemed like the pink-hued stuff was everywhere, popping up on some of the city's best wine lists. It got me wondering: Is rosé making a comeback?

"Actually, it's always been around," says Andrey Ivanov, sommelier at Elaia and Olio (1634 Tower Grove Avenue; 314-932-1088). "It's just that our market is starting to be willing to try new things. People are more educated about wine now." Ivanov acknowledges that increased awareness of rosé has led to increased demand. "I can't think of a reputable restaurant in town that doesn't have at least one [rosé] by the glass."

John Nash of Starrs Wine & Spirits (1135 South Big Bend Boulevard, Richmond Heights; 314-781-2345) observes that people are changing their opinions of rosé. "It's been made in the south of France for a generation or two," Nash says. "A lot of people see pink and are turned off. I used to not ask people if they wanted rosé. I'd just hand them a glass and they'd think it was fabulous."

As Nash explains, rosé production began in the south of France as a byproduct of making red wine ("A good farmer doesn't throw anything away," Nash laughs.) Winemakers in this predominately red-grape region would pull off some of the juice during maceration in order to make fuller, richer reds (increasing the skin-to-grape ratio makes for heartier wines). The light, quaffable, pink-hued juice they pulled off turned out to be good in its own right -- and perfect for the hot Mediterranean summers.

Ivanov, who decided upon rosé as Olio's first private-label wine, notes that the weather has a lot to do with rosé's surge in popularity. "People get excited about it after a long winter," he notes. It's the wine's versatility, however, that makes it such a gem. "Rosé is a fantastic food wine," he says. "It has great acidity, complex flavors and goes with foods that are more difficult to pair such as tomatoes, vegetables and fresh herbs. You can serve it with anything from fruit to light fish."

Nash seconds rosé's versatility. "It has the freshness of a white wine with the body of a red. There's nothing better for the sultry St. Louis heat."