At the Shack PubGrub (3818 Laclede Avenue; 314-533-7000), the "green eggs'n'ham" boardwalk fries come out fresh from the fryer crispy and completely smothered in creamed spinach, diced ham with just-barely caramelized corners, fresh-chopped green onions and a cheery yellow sunny-side-up fried egg. We don't know who that Dr. Seuss "Sam" guy is, but he'd be crazy to not crave these after giving them a try.

Fall calls for a specific kind of comfort. Sure, soup and cider count (the Shack offers both; the latter of the hard variety), but beyond that lies the desire for a big mess between bread with a side of freshly fried carbs. The Shack opened about a month ago with the intention of appeasing nearby college crowds and beyond with a moderately priced, high-quality menu of all that and more. 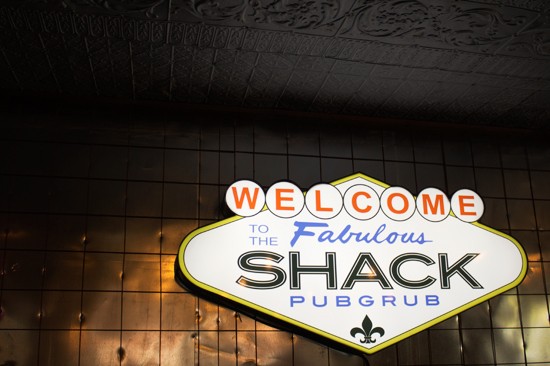 Mabel Suen
The back wall at the Shack PubGrub.

The concept, which fills the space formerly occupied by drinking destination Pierre Laclede's, comes from the same team that spearheaded the Tavern Kitchen & Bar as well as two locations of the Corner Pub and Grill.