Brooke Roseberry has lived in Fox Park for fourteen years, and she has watched the historic building at the corner of Shenendoah and California avenues be many things. Finally, though, she's bringing a restaurant to the neighborhood that it desperately needs.

"We kept waiting for someone else to do it, but no one did," Roseberry tells Gut Check. "It's always been this kind of sad eyesore on a corner that could be a really nice corner. It's been very heartbreaking."

Roseberry and her husband (and executive chef) Tony Lagouranis are set to open the Purple Martin at 2800 Shenandoah in mid-March. They restored the building about two years ago, and fun fact -- it was supposedly the site of St. Louis' first lesbian bar in the 1950s.

"I love my neighborhood -- it's wonderful to have that history," Roseberry says. "[The building's owner] was holding out for what we wanted: a community gathering place and a place where people could feel welcome."

She realizes not everybody can afford nearby places such as the Shaved Duck, and Van Goghz is more of a martini bar.

"Every person in the neighborhood can walk by and say, 'I'm welcome here.' Nobody should feel like they're not fancy enough for it," Roseberry says. 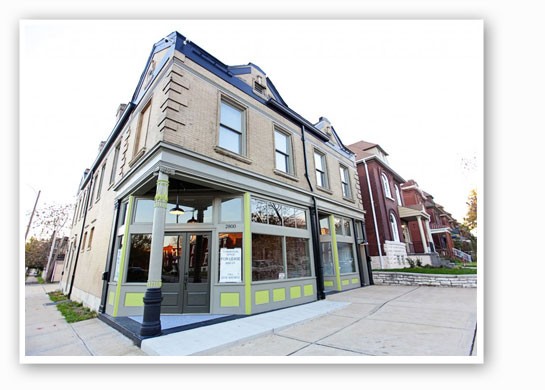 The building at Shenandoah and California. | The Purple Martin

Lagouranis is still developing the menu, but he says it will have a decidedly North African and Mediterranean feel. His father, also a restaurateur, is Greek -- Lagouranis says that's definitely an influence. One dish he's planning, called lablabi, is something he hasn't seen anywhere in the United States. It's a sort of chickpea stew with a bread base, pickled lemons, beets and capers, sometimes served with fish. There will probably be a lamb shank, he says, and he's thinking about a Greek stuffed cabbage, as well as sandwiches.

"I'd really like to do a catfish sandwich, but North African-style -- pickled vegetables on there as well," Lagouranis says. "I have all these ideas that I think are too eclectic. I'm trying to make it more mainstream and keep some of these odd dishes I've collected over the years. It'll be a changing menu, too, so we'll see what works and what doesn't."

The bar is made out of a 1920s boxcar that was about to be thrown out; the top of the bar is also salvaged wood. This is in keeping with the historic feel of the building, which has exposed, point-tucked brick.

The restaurant is named after a bird that was often seen on the Lagouranis' uncle's farm in Ohio, where he spent many a summer as a kid. Purple Martins are a curious type of North American swallow whose eastern population has spent so much time with humans, they no longer have the ability to nest by themselves. People put up Purple Martin houses -- those tall, apartment-building-looking birdhouses -- or hollowed out gourds to sustain the population.It's also the name of a cocktail Lagouranis created while working in Chicago.

"It's a species that was cultivated by the American Indian that doesn't really exist in the wild by itself," Lagouranis says. "It relies on people. They're really common in rural America, so I just thought it was a fun name for a restaurant."

The Purple Martin plans to open in mid-March. You can follow its progress on its Facebook page.