Asian Cafe: Not Quite as Far as Vietnam (But Close) 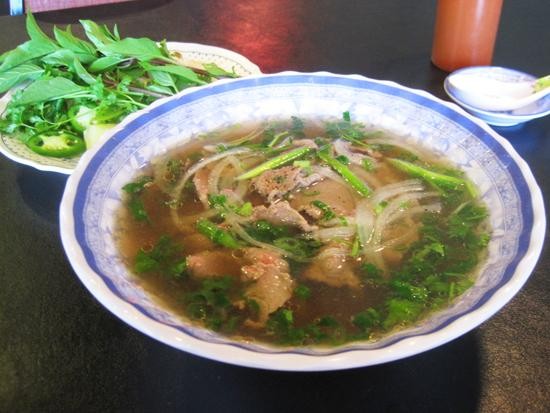 The Lunch: A bowl of pho tai (traditional beef-noodle soup with sliced beef) for $7.50.

I rarely make it as far west as O'Fallon, but several readers have urged me to try Asian Cafe, a relatively new strip-mall eatery, so I recently gassed up the Gut Check Mobile Command and made the trek.

The Verdict: Though strip-mall bland on the outside, the interior of Asian Cafe has a clean, modern look that's quite attractive. The menu will be familiar even to casual fans of Vietnamese cuisine: soups and banh mi sandwiches, bun and pan-fried noodle dishes, sautéed meat and seafood with rice. The "house specials" include several dishes served in clay pots, and there is also a hot pot, for two, with lamb.

For this, my first visit, I ordered my go-to Vietnamese dish: pho tai, the traditional beef-noodle soup, served in this case with thinly sliced beef. As is traditional, this is served with fresh basil, cilantro, lime, jalapeño and bean sprouts that you can add to your liking.

Pho is a mainstay of the menu at almost every Vietnamese restaurant, but the flavor of the broth varies -- sometimes greatly -- from place to place. Asian Cafe's broth is very brightly flavored and a touch hot. No one flavor dominates, a welcome change of pace from the strong anise note that pho often has. The beef in my order was tender and, even after continuing to cook in the broth, a faint pink in the center.

O'Fallon is quite a distance from my usual orbit, and one dish is no basis on which to judge a restaurant, but Asian Cafe's pho has convinced me to return to try more of what it has to offer.