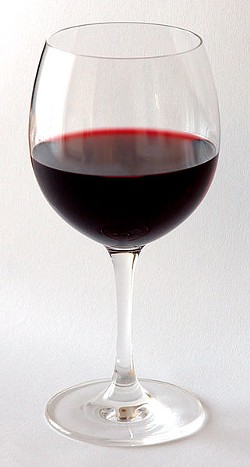 Image via
Wine Spectator (via Grub Street) files a report on a University of Navarra (Spain) study that finds that those who drink wine "in moderation" don't gain as much weight as the general population -- this in spite of the fact that alcohol is widely viewed as "empty calories."

("In moderation" is defined as one or two glasses per day, which eliminates the entire Gut Check staff from the demographic, and quite possibly most of our readership, too.)

The researchers aren't entirely sure why this is:

"This might be explained by a healthier overall dietary pattern of wine drinkers," the researchers write. Some scientists have suggested that red wine induces certain enzymes to improve the metabolism of fat cells. Others suggest that the red-wine compound resveratrol inhibits the conversion of sugars into fat. The Spanish scientists say the high levels of antioxidants in red wine may reduce the high levels of inflammation associated with obesity.

Now, the researches note that their findings DO NOT equate to "drink wine to lose weight."
However, we at Gut Check aren't bound by the strictures of science, logic or plain ol' common sense. We also have a little bit of a tummy. (We do eat for a living.)