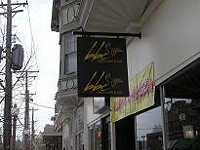 Ian Froeb
BBC Asian Cafe & Bar is now open at 243 North Euclid Avenue in the Central West End. The restaurant opened last year as BBC Banh Mi, Boba Tea & Crêperie. From what I could see from the outside, the space has been given a sleek makeover, much darker than the original's "pop" look.

The part of the menu posted on the window featured some dishes (including crêpes) held over from the previous incarnation, which I reviewed last April.
© 2022 Riverfront Times