photos by Keegan Hamilton
Javier Mendoza goes loco after Spain's winning goal.
There wasn't a Spain fan on the planet who was sure their team was going to win today. Everyone knew that they stood a decent chance of defeating the German juggernaut (they beat them two years ago in the EuroCup and were the favorites going into the tournament) but still, the odds were stacked against the Spaniards. And with decades of World Cup letdowns standing in the way of the country's first ever World Cup final, every person wearing red, yellow and blue from St. Louis to Sevilla had their doubts.

At Guido's -- the unofficial headquarters for Furia Roja fans in the city -- the pre-match atmosphere was palpably tense. The conversations oscillated between Spanish and English, filled idle chatter about changes to the starting lineup and the strength of the German side. Spain dominated the first half but never truly threatened to score. Then, in the 73rd minute, Carles Puyol put his curly-haired head on the ball and directed it into the back of the net to put his team ahead 1-0.

First it was a roar. Then the crowd shot up from their seats. It was all fists in the air, high fives and embraces. Then came the Olé Olé Olé chants, which got louder and louder as the bartender served the celebratory round of drinks.

After that it was a deep breath and an uneasy silence as everyone looked around to the room and at the giant TV screen to confirm that what they thought they just saw was for real. It most certainly was and, after 20 anxious minutes ticked off the clock, the refs blew the whistle and guaranteed that Spain's improbable run will continue for one more match.

It wasn't just that Spain won, either. They dominated the match from start to finish, controlling possession of the ball and taking far more shots on goal than their opponents. The Germans, unlike Paraguay, gave Spain room to breathe. They waited in vain for the chance to let loose their blitzkrieg counterattack. It was a near-flawless performance by the Furia Roja. They made the Germans look like a frustrated kid at recess who can't get the ball in a game of keep away. 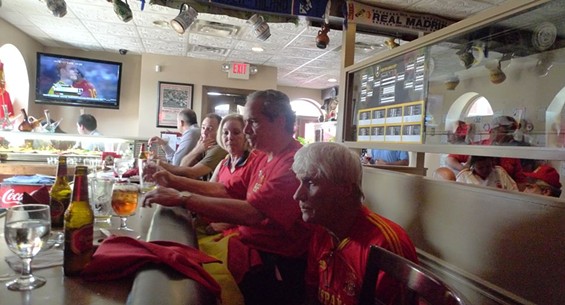 Nervous Spain fans just before the start of the match.
It's hard to describe what the victory means to Spanish fans. Imagine if all the Cardinals players were from Missouri and the team was ten times as popular as it is now...only they never won a championship. And they only got the chance to do so once every four years. That might give you a vague idea of the significance of the national team to the average Spaniard.

"My mother was Spanish," one bald, goateed fan said, "That means two things were guaranteed growing up. One, I was Catholic. Two, I was a Spanish soccer fan."

Seated in the center of the narrow, crowded bar area local singer/songwriter Javier Mendoza was the embodiment of the dualistic Spanish defeatism and enthusiasm. Twirling a bottle of Estrella Galicia with his fingertips and munching on jamón and queso manchego tapas, he explained how he was born in the U.S. but raised in Madrid. He grew up rooting for Real Madrid and being perpetually let down every four years in the World Cup.

"I'm glad you're sitting here for me to talk to," he said a few minutes before kickoff, "Otherwise I'd be so nervous I wouldn't know what to do with myself." 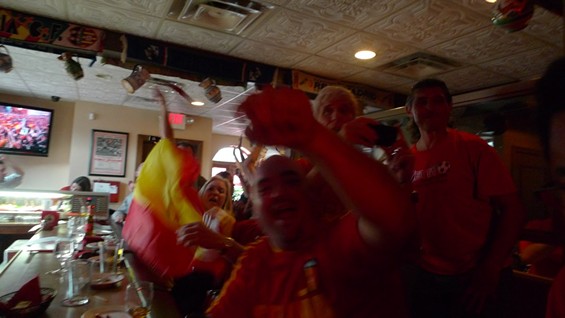 The same fans going wild after the final whistle.
Mendoza played semi-pro ball in Germany, then college soccer at Saint Louis University. He describes himself as a "fanático" -- to the point that he took two weeks off from touring to watch the World Cup. He vowed before the match that if Spain won he was going to travel to Madrid to meet-up with his cousins and watch the final.

During the match he restlessly chattered soccer advice to himself in Spanish and when Puyol's immaculate header flew past the German goalkeeper, Mendoza simply raised his arms and screamed at the top of his lungs. (Here's hoping he didn't damage any vocal chords.)

As the game ended, everyone posed for pictures, waved flags and sang Olé Olé Olé. The bar sold out of Estrella Galicia. Guido's owner Segundo beamed with pride shook everyone's hand as they filed out the door. Mendoza made arrangements to fly to Spain on Friday. Everyone else made plans to meet back at Guido's on Sunday to see Spain take on the Netherlands.