MOFU: Not Your Mama's Tofu 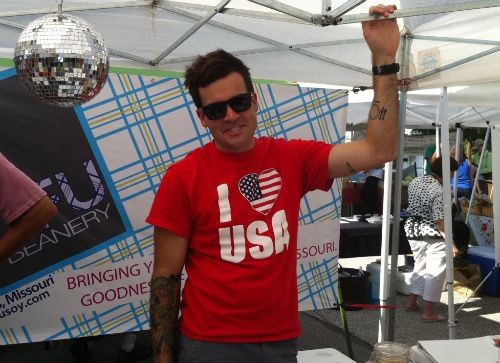 While wandering up and down the rows of vendors at the Maplewood Farmers' Market (7260 Southwest Avenue, Maplewood) in the dead heat of summer, you'll find an abundance of heirloom tomatoes, sweet corn, colorful peppers, cuts of fresh pork and loaves of bread - the items that are familiar to the regular market goer. But at a tent with a small disco ball hanging from the ceiling is Dan Brewer wearing a pair of shades and standing behind a table displaying a giant jar of dried soybeans and a selection of his artisan tofu. Really? Tofu at the farmers market? Absolutely.

Although Dan Brewer says that MOFU does not stand for "mother fucking" he does claim that his MOFU TOFU is "mother fucking good tofu." Born and raised in St. Louis Brewer attended Johnson and Wales Culinary School in Denver, CO before moving back to St. Louis to attend graduate school at SLU. Less than a handful of hours away from his Masters in Nutrition, Brewer is not busy wildly sending out resumes and scouring want ads like most of his fellow graduates. Instead he is elbows deep in soybeans as the solo man behind his company, MOFU TOFU.  "Tofu and I have had a love affair for a long time" Brewer says. "Initially it only appealed to me as a Dietitian. I actually did research during my undergrad studies on tofu as a cream replacement. I also would use it for things like soup thickening and making fake mayonnaise. But, it wasn't until I made it for the first time that I truly gave it the respect it deserved. And honestly, it didn't deserve it until then because the stuff you get from giant companies or the grocery store sucks."

MOFU, however, is a completely different animal - um, legume. "MOFU is a completely different experience than what people think tofu should be like. It has a texture and nuttiness not found in mass-produced tofu," says Brewer, who uses non -GMO soybeans from a farmer co-op in Clarence, MO, about 150 miles away and is still searching for more organic farmers to work with. Utilizing kitchens in the basement of SLU he churns out every batch of tofu by hand. "I make everything from scratch, the tofu, the sauces, everything. This way I know what is going into it, and I can control the details." Currently Brewer sells to Schlafly Bottleworks and Harvest Restaurant as well as at Local Harvest Grocery and in person at The Maplewood Farmers' Market.

"The market is amazing. It is just the right mix of farmers and producers. I love interacting and sharing conversation about food with people. I am starting to get a following at the market, but the most surprising part is the diversity of people I have had like/purchase MOFU. You really can't judge a palate by its cover." Brewer did endless amounts of market research during his businesses infancy but says that it was "largely a waste of time. I learned that if something tastes good, then it tastes good -- and that's how people work as well. It feels really good when people come back week after week to enjoy your product."

Brewer gets bristly when tofu is considered merely a meat replacement. "Tofu can stand on its own and be a regular part of anyone's diet. In fact, Josh from Monarch has been grilling it with pesto and olives and doing things I never even thought of. I replicated one of his dishes via picture he posted on twitter and it was amazing. And it's good for you, but that seems to scare people."

Brewer resists talking about the healthiness of tofu at the market, assuming most people know of it's general health attributes. "But," he says "if given the opportunity I will geek out on sharing the nutritional information."

So next time you're at the Maplewood Farmers' Market, pick up your regular items and then visit the tent with the disco ball. Coming soon to MOFU's line-up will ne MOFU medium and MOFU's take on Silken tofu pudding. Silken Tofu Pudding at a farmers' market? Absolutely.