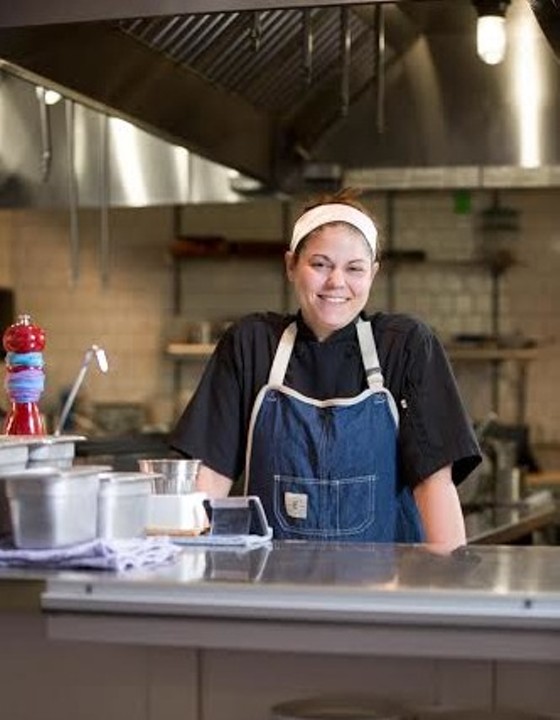 Cucina Pazzo's (392 North Euclid Avenue; 314-696-8400) chef de cuisine Jessie Gilroy grew up tinkering around her parents' kitchen and thumbing through her mom's stashed-away cookbooks. It should have come as no surprise to them that she wanted to go to culinary school after she graduated high school. "My parents didn't want me to go," Gilroy recalls. "They were the type of people who thought that you needed to get a four-year degree. So I said, 'OK,' and moved to Hawaii to become a marine biologist."

Gilroy laughs that her decision to move to Hawaii may have subconsciously been a way to get her folks to agree to culinary school. She studied marine biology for a year before changing majors to hospitality management. Eventually, Gilroy dropped out of college all together, spending her time on the island immersing herself in its cuisine.

When she came back to the mainland, her parents supported her decision to pursue cooking. She headed to Le Cordon Bleu in Miami and returned to St. Louis to take a job at Charlie Gitto's on the Hill. "It was a wonderful place, and I learned a lot, but it was very old school," Gilroy explains. "I wanted to try new techniques and play around, but that wasn't what they were about." On an anniversary dinner at the Tavern Kitchen & Bar (Cucina Pazzo's sister restaurant), Gilroy loved the food so much that she asked for a job on the spot. The owners obliged, eventually tapping Gilroy as chef de cuisine at Cucina Pazzo.

Gilroy took a break from the "crazy kitchen" to share her thoughts on the St. Louis restaurant scene, her guilty pleasure that's fit for a lumberjack and the soundtrack of her mornings.

What is one thing people don't know about you that you wish they did? I am way more of a girlie girl than people think I am. I love running around a kitchen all day in my chef clothes, but on my days off I like to look like I care.

What daily ritual is non-negotiable for you? My morning coffee is absolutely non-negotiable. I am completely addicted and unable to function without it. I also need my '90s pop radio on Pandora to get the creativity flowing in the morning.

If you could have any superpower, what would it be? The ability to read minds so that I can understand what people actually want.

What is the most positive trend in food, wine or cocktails that you've noticed in St. Louis over the past year? St. Louis is really starting to play with their food in a good way. Chefs are being really creative using ingredients that are unfamiliar to many people, but using them in ways that are familiar. Also, savory ingredients are becoming regularly used in sweet creations, which I really love.

Who is your St. Louis food crush? Kevin Nashan [Sidney Street Cafe, Peacemaker Lobster & Crab Co.]. I recently was able to have a date night with my husband and we got the chef's tasting menu at Sidney Street, and I seriously fell in love with every dish that was put in front of me.

Who's the one person to watch right now in the St. Louis dining scene? Katie Collier from Katie's Pizza and Pasta. They are really doing awesome things over there. I live down the street and try to eat over there as much as possible. I do not think she is trying to reinvent the wheel; she is very much like me, with wanting to put her spin on classic dishes and ingredients, and I love that.

Which ingredient is most representative of your personality? Allspice. It is very bold with a little bit of "What is that?" on the end.

If someone asked you to describe the current state of St. Louis' culinary climate, what would you say? I feel like the St. Louis food scene has really stepped up its game, and the best part about it is that people are stepping outside of their bubbles and trying things they are unfamiliar with. As a chef, there is no better experience than giving people that "oh my god" moment when they try something new.

Name an ingredient never allowed in your kitchen. I have two: white pepper (I see no point in it and it tastes like cardboard) and blue cheese.

What is your after-work hangout? As lame as this sounds, my house. I have a husband, two puppies, two cats and a turtle that I rarely get to see, so I really just want to go home and spend time with all of them!

What's your food or beverage guilty pleasure? Carl's Drive-In! I have been eating there since I was a kid with my dad, and I get the same thing every time: a "Curly Q Dog" with chili, cheese and onions, a double cheese burger with everything and a small onion ring. I am aware that this is a meal for a very large grown man, but I love it and just do not care.

What would be your last meal on earth? Duck! Confit and seared duck breast. It is my favorite thing in the world. I have gotten to the point where I judge restaurants on their duck. The best one I have ever had in St. Louis was at Sidney Street Cafe.