Theresa Rein, one of Billy Goat Chip Company's owners, wants to be very clear on the following fact: the new, spicy Kicker Chips are not barbecue chips, in spite of their color and texture. "People think the red color means barbecue, but there's no smoke, no tomato [in the Kicker Chips]. Instead, we use a hot pepper," she states. 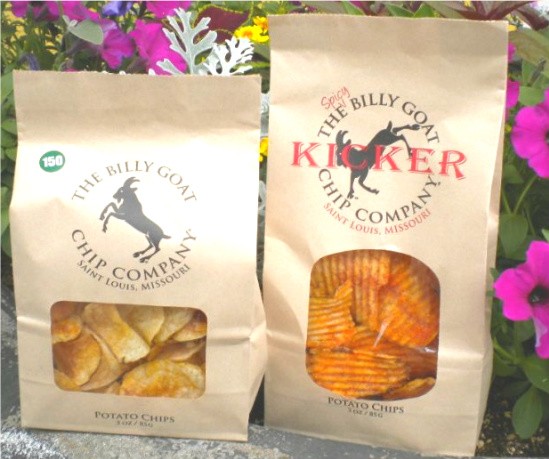 The seasoning mix draws its inspiration from the dry rub chicken wings at the restaurant (R.I.P.) for which the chip company is named. In contrast to the original Billy Goat Chips, the Kicker Chips have a wavy-cut, and the thicker chip seems to hold a bit more of the canola oil, but not unpleasantly. The seasoning itself is spicy, but not burning hot.

On Memorial Day 2010, Billy Goat did a test run of the Kicker line in seven stores. For the next year, people who had sampled the Kicker chips kept calling in, asking where to buy more. According to Rein, with the company now up to ten employees since opening in 2009, it was "just the right time" to add a second line.

When Billy Goat announced the Memorial Day 2011 launch of spicy Kicker Chips on its Facebook page, the wall quickly filled up with fans wanting to know where to find a bag. According to one clerk at Local Harvest Grocery, (3108 Morgan Ford; 314-865-5260), one seeker drove 30 miles to the store because he heard that Local Harvest had the chips in stock.

The label touts Kickers' lack of MSG, but that fact doesn't mean they're not addictive; just don't call them barbecue chips.