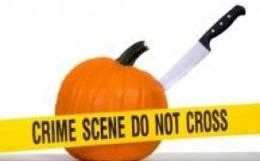 Now that we've had time to recover from Halloween's massive sugar crash, it's time to assess the damage. How many kids received drugged candy this year? Apples with razor blades?

Oh, wait. That almost never happens. Although Bill Maher has some good ideas on the subject.

Despite decades of urban legends and comedic suggestions that trick or treating for LSD might work better than pumping kids full of prescription drugs, it turns out that we shouldn't have worried about adults harming kids via Halloween candy. We need to beware of the candy-crazed costumed lunatics.

In Aiken, South Carolina, a woman told a group of trick-or-treaters that she was going to steal their candy.

The gun wasn't loaded, but the child had a loaded clip in his possession. His brother was also packing heat. They'd stolen the guns from their grandfather. The darlings were returned to their parents.

In Fort Myers, Florida, a nine-year-old went ballistic when a school bus driver told her to stop eating Halloween candy. The child cursed and spat on the bus driver, then threw chunks of asphalt at the bus when she was expelled.

After being taken to jail, the kid continued to rage and was subdued with pepper spray.

Her mother explains that the girl is schizophrenic and is prone to such rages when she's in need of her medication. Which isn't a Kit Kat bar.