Tidbits from Ozzie's and the Rhine Haus 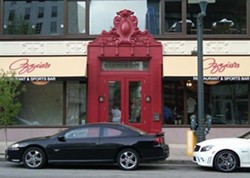 More than a month has passed since Ozzie's Restaurant & Sports Bar (1511 Washington Avenue; 314-241-0100) canceled its first-anniversary party and then closed its doors due to a power outage. At the time, owner Roberto Gallardo told Evan Benn of the Post-Dispatch that the restaurant would consolidate its operations to one floor and scale down the menu with an eye to a July 4 reopening.

As of this week, the restaurant has yet to reopen, and calls to its phone number go unanswered. When I peeked inside on Tuesday afternoon, there was no work of any sort taking place inside. I'm trying to contact the restaurant through other channels. More as I learn it.

Elsewhere, I reported in April that a new restaurant was earmarked for the Westmoreland building at 255 Union Boulevard, the former home of numerous restaurants, most recently Spyglass on the Park. George Mahe of St. Louis Magazine reports that the restaurant will be a "German/American gastropub" called Rhine Haus Eatery & Pub.