Cooking for Your Cat: Batter Blaster

Not many other people, I've found, cook for their cats. When you meet another cat-chef and they claim to have success, you tend to pay attention.

So it was with a lawyer I met at a concert a few weeks ago. During intermission, we were making small talk with some other people about our jobs and I mentioned that I cooked for my cat. (I also mentioned that I wrote features and news stories, too, but I guess after you've had a few drinks, that's far less interesting.)

An honest-to-God miracle, after the jump...

"Yes! I had this cat and his back legs were collapsed. I'd make him pancakes and he'd walk across the kitchen to eat them, and then he was totally cured."

"Wow!" I said. This sounded almost magical. "Did you have a special recipe?"

I resolved to try it as soon as possible. Yes, it could be that this cat was just weird, but who was I to deny the power of anything that made the crippled walk once more?

As it happened, last time I was home, my mother had presented me with a can of Batter Blaster, which seemed equally miraculous. What looked like a can of whipped cream actually contained ready-made pancake batter. You just squirted it out onto the griddle and voila! And it wasn't even toxic. It was organic! By all reports (including my mother's), the pancakes weren't bad. It wasn't Aunt Jemima, but, I reasoned, why not compound the miracles?

And so I pulled the griddle out of its usual hiding place, melted some butter and tentatively squirted - it really was more of a squirt than a blast - two puddles of batter. Gradually they hardened into two delicate, lacy pancakes. (I'd been a bit stingy with the blasting.)

"Bess, you have to come see!" I cried. "This is amazing!" I heard a thud, which meant Bess had jumped off her favorite windowsill and was ambling into the kitchen to investigate.

I tore one pancake into tiny pieces and carefully placed them in Bess' bowl. I put the other on a saucer. Bess and I sat and stared at our pancakes in awe. 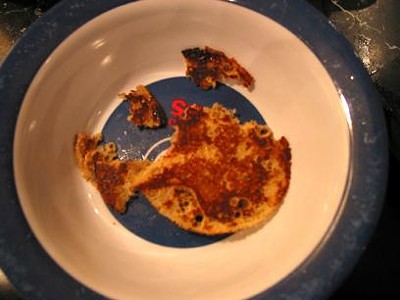 "Well?" I said. She looked up at me, as if to say, Go ahead, my official taster. "Okay," I said. Tentatively, I took a bite. It was light and sweet, with a slight hint of maple flavoring. "It's good!" I said.

But Bess has greater respect for the miracles and mysteries of food science than I do and preferred to admire her pancake from afar.