After recently taking over as brewmaster of Ferguson Brewing Company (418 South Florissant Road, Ferguson; 314-521-2220) Ryan Landolt looked to begin his reign with something different and unique -- something in line with his aspirations of establishing an identity for the north county brewery.

It seems he made an excellent choice with his "Watermelon Saison," an incredibly light and fresh summer beer. It's wonderfully drinkable at 6.2 ABV -- perhaps somewhat dangerously so, though we aren't complaining, just warning those who likewise tend to lose count. "It's cool because I get to determine the seasonals, now," Landolt says, enjoying the new autonomy. "I suppose it's my first 'big-stage' moment." Thus, befitting the analogy, we offer a standing ovation.

The old chalkboard with all the details -- Saison at 6.2 ABV | Pat Kohm

The Watermelon Saison was introduced officially on September 5th and now awaits the masses. Brewed with 30 watermelons locally harvested from Thies Farm, a mainstay at the Ferguson Farmers' Market, which grew the watermelons specifically for the occasion. The origins of this beer can be found in the brewery's experimental ten-gallon pilot system. 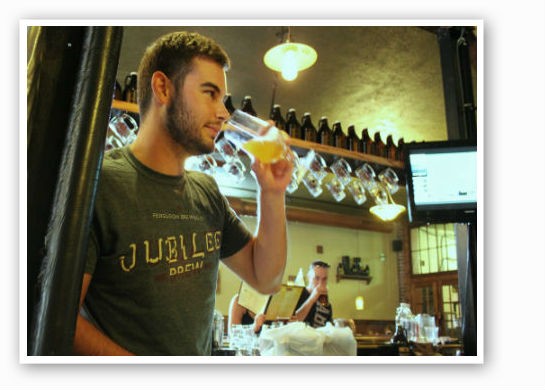 The beer made its first appearance at Perennial's Midwest Belgium Beer Fest. The next day, the owner of Ferguson Brewing Company received requests for more and immediately told Landolt, "You have to brew a full batch of this." The people had spoken. Responding to popular demand, eight barrels were brewed -- roughly sixteen kegs -- which means there's plenty to go around, but the beer won't be available forever.

A labor-intensive though "labor of love" endeavor, the time and effort required to make such a beer means its availability will necessarily be sporadic. "A lot of work went into it with literally scooping the watermelon -- me and one other person," Landolt says. Remember, he's talking about roughly 30 melons. But the final product seems well worth it; this is an excellent beer that can be enjoyed by aficionados and light-beer drinkers alike. 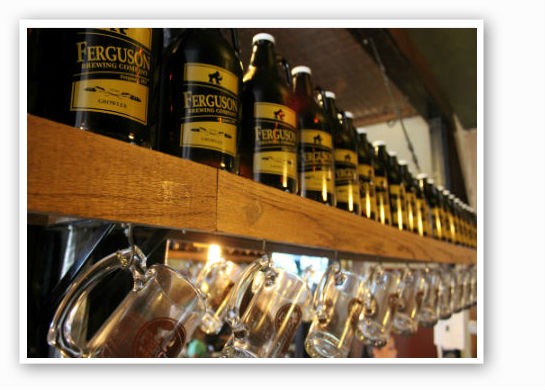 Grab ya a growler for later. | Pat Kohm

In the near future, Landolt mentions starting a barrel-aging program and will definitely continue to churn out beers that offer surprising flavors and combinations. The ability to pursue innovation is one of the major benefits of a smaller operation -- the freedom to experiment. "That's my favorite part. The year-round stuff stays the same but the limited release beers we really get to experiment with. It's super nice that I don't have an owner on my back. He gives me a lot of leniency, which I really appreciate."

In addition to the Watermelon Saison, Ferguson just released its always-popular Pumpkin Ale. And it won't be too long before the Vanilla Bourbon Porter shows up on tap -- just another reason to make your way north.

Gut Check is always hungry for tips and feedback. Email us!.