The World Goblet Round 3: Chile vs. Germany

Australia has already made off with the top spot in Group C, but Chile and Germany each have a chance to bow out with their heads held a bit higher. We knew Germany would have a tough time in this competition owing to the price limit -- most of its decent "value" wines cost north of $12 (if only by a few bucks), but Chile's performance has been a real surprise. Their wines have been, frankly, crap, and that's despite our best efforts, including recommendations from good wine merchants, to source them. Today the Chileans check in with an organic wine. Decent organic cabernet for $10? Let's see. 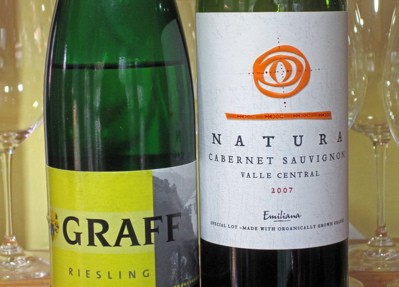 2007 Natura Cabernet Sauvignon Valle Central Chile ($10) Can a red wine be black? This one's about as close as any wine could come. Somewhere in here lurk plum and herbs, but it's too dark to smell them. Can't really taste 'em, either. This has all the heft and tannins of a heavy-duty cabernet, but it's entirely missing the fruit. Another Chilean clunker.

2006 Graff Riesling Piesporter Michelsburg ($12) The scent's a beguiling mix of peaches, flowers, rocks and a hint of diesel fuel. (Laugh if you like, but that profile is a classic hallmark of rieslings with a little age on 'em.) The flavor lacks complexity, but this one sure beats a poke in the eye with a sharp cabernet. A little more acidity would be welcome, but this is still a decent $12 riesling.

A glimmer of hope for the Germans. You're far better off shelling out a dollar more for a bottle of Schloss Saarstein Qba, but this wine brought more than enough to the table to obliterate its Chilean foe.