In the Studio: Brothers Lazaroff

Brothers Lazaroff Where: Sawhorse Studios With whom: Engineer Jacob Detering When: Recording began February 11 When due out? Summer 2010 Sounds Like: The follow-up to last year's American Artifact - and the Brothers' third studio effort overall - is taking shape.

According to David Lazaroff, he and brother Jeff "co-wrote the material over the last year and didn't share it with bandmates Grover Stewart (drums), Mo Egeston (keys), and Theodore Brookins (bass) until getting into the studio. The tunes were learned on the spot and everything was cut live -- most first, second and third takes." In addition, this is the band's first studio foray since David moved back here from Austin - and its first recordings with this current lineup, which has been playing out and around St. Louis for the last one-and-a-half years.

"Like American Artifact, the new songs -- while a bit more eccentric then the last batch -- are rooted in the folk, Americana and roots-rock tradition, while experimenting with psychedelic, soul and indie sensibilities," says David Lazaroff. "Musically, the departure from the last album comes from the influence of the current St. Louis-based band, whose members are steeped in the house, neo-soul and funk scenes. Experimental drum and bass grooves, more keys and the addition of some messy two guitar inter-weaving from [my brother Jeff and I] pushes the sound in a new direction." 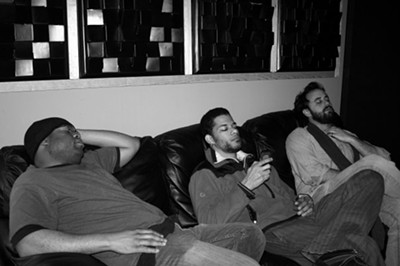