Better Than: Playing DropkicktheFaint over and over again.

It's easy to forget just how ahead of the curve the Faint has always been. Way back in 1999, the Omaha quintet decided to add squelching keyboards to the vanilla guitar-bass-drums combo. The result of the band's decision (1999's Blank-Wave Arcade) pre-dated the dance-punk and new-wave explosions by nearly a half-decade. In fact, the Faint arguably kickstarted these movements with its 2001 batcave-electro masterpiece Danse Macabre, which is inarguably one of the decade's most influential albums. 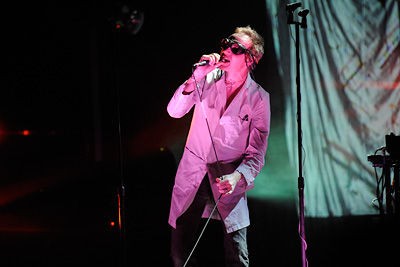 Because of the band's futuristic bent, it's also easy to forget just how fantastic it is live. That became quite clear during the Faint's Friday night Pageant show. As a creeping-footsteps low-end and throbbing beats signaled "Agenda Suicide," the pit in front of the stage sprang to life; it positively exploded for the clashing sideways guitars of the second song, "Dropkick the Punks." The sea of dancers continued to clap, pogo and generally spazz out for the rest of the group's 75-minute set, which was a nice blend of older songs and new tunes from the band's latest, Fasciination.

The latter songs, despite being less interesting and innovative, came across better live than they did on Fasciination. The Eurofunk-esque "Forever Growing Centipedes" and Britpop-puts-on-black-lipstick "Psycho" kept the energy high. So did "Get Seduced" - whose marching synths totally nick the People's Court theme - although the circuit-bending electro of "Mirror Error" and stutter-step '80s homage "Machine in the Ghost" didn't connect as well. Other highlights included songs from Wet from Birth ("Paranoiattack," "I Disappear"), Macabre ("The Conductor") and Arcade ("Worked Up So Sexual," "Call Call"). 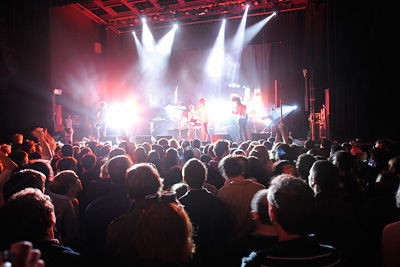 Pocket-sized vocalist Todd Fink (née Baechle) sported goggles and a doctor's white jacket, causing my show companions to reference Bill Nye the Science Guy, Dr. Who and Thomas Dolby ("Science!"). Fink bounced around the stage like a nerd on a sugar high, a nice counterpart to Redwood-tall keyboardist Jacob Thiele, who contorted himself in place as if his joints were made of supple putty. Not to be outdone, bassist/guitarist Joel Petersen and guitarist Dapose spun around like marionettes on either side of the stage. Black-and-white video projections of pop-art images, words and other abstract animation played behind the band, adding nice touches to a busy (but not seizure-inducing) light show.

Fink's hiccupping vocal monotone -- which draws equally from hip-hop and robotic rock -- would be grating if he fronted any other band. But in context with the Faint's monstrous dance tunes, he's the perfect front man to convey the band's detached observations about life, birth, death, sex and politics. Fink's secret, though, is that he finesses stylistic diversity from his narrow vocal range: The encore began with the dirge-gloom album track "Birth" and poppy new single "The Geeks Were Right." After sorting through some mic problems, the band ramped up the chaos again with the Macabre goth-techno classic "Glass Danse," which ended the show on a perfect note.

By the way: Oddly enough, the band repeatedly thanked the crowd just for showing up and sticking around. Aww.
Critic's Notebook: The Faint could have played for another half hour or so. Tunes I missed hearing: "Your Retro Career Melted," "How Could I Forget," "Let the Poison Spill Down Your Throat" and "Southern Belles in London Sing."
Personal Bias: I am an O.G. Faint fan who jumped on as a fan in the year 2000, thanks to my college radio station. I've lost track as to how many times I've interviewed the band, although I do know this was my fourth time seeing it live. The first time was four days after 9/11 at the Middle East in Cambridge, Massachusetts. The band members were so tall, their heads nearly hit the ceiling of the basement venue. The second time was with TV On the Radio opening, right after the latter released its first CD. The third time was at SXSW 2007, which was a miserable, crowded experience.