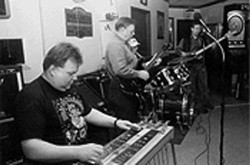 Sarah Carmody
Don Curtis, front, pictured in the RFT in 2000

Some sad news to report from last week: Well-respected steel-guitar player Don E. Curtis passed away after suffering a heart attack. He was 53. Curtis played in the Missouri Valley Boys, the RFT's 2008 Best Country Band (Traditional), and had also performed with Commander Cody and Bobby Helms, according to Roy Kasten's obituary on the KDHX blog. He taught lessons at steel-guitar mecca Scotty's Music and was an integral part of the annual International Steel Guitar Convention.

In 2000, Kasten also interviewed Curtis for an RFT story on Horstmeier's in St. Peters. Even then, Curtis' credentials were impressive:

He landed a job writing for the Steel Guitar International Inquirer and came to work for DeWitt Scott, owner of Scotty's steel-guitar shop in St. Louis. In the last 10 years, he's become a master of the steel, published nine instructional books and backed figures as imposing and diverse as Del Reeves and Bill Monroe. You hear the wit and fire and pathos he brings to a tune like "Swingin' Doors" and you might think you're hearing a man playing his dreams. Perhaps, though as many country songs will explain, you live long enough and most dreams have to reckon with the hard facts of life. "All I ever wanted to do was play "Hot Rod Lincoln' on the guitar," Curtis says. "That's all I ever wanted to do, and I can't do it."

Read the rest of that story here.