Ezra Koenig, singer and guitar player for Vampire Weekend, didn't only hit all the high notes during the New York band's set at Pitchfork Music Festival on Saturday, he livened them up and stretched them out.

Meanwhile, bass player Chris Baio shimmied and bended his knees, while playing the higher notes his instrument could muster. During the band's 5 p.m. set, the crowd predictably ate up everything the Vamp Weekend gave them. A solid set full of songs from its self-titled debut that was released in January on XL Recordings, this band is about to grow beyond the walls of Pitchfork's indie kingdom.

Songs from Vamp Weekend's self-titled record dominated its set list on Saturday, the end of each song was greeted with -- cliche as it may sound -- uproarious cheering from a central core of about 5,000 audience members near the stage. 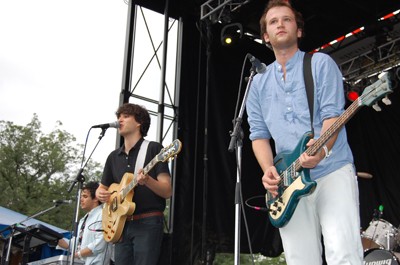 The sound of Vampire Weekend -- poppy, sunny, "afro-pop is an often applied adjective -- paired well with the large festival stage. While earlier acts in the day's show -- Memphis' Jay Reatard comes to mind -- may fit better in a brick-walled bar, Vampire Weekend's songs seem like they are made for the festival stage. The guitar, keyboard, drums, bass and Koenig's voice pierced through the humid air of Union Park, reaching into most of the packed Chicago park. 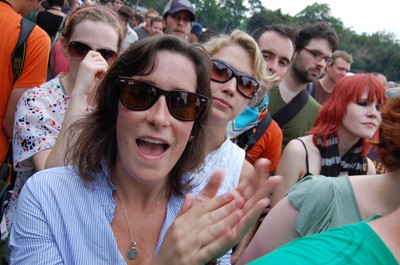 At the end of "Oxford Comma," the second song on its self-titled LP, a big "woooooh" erupts from the crowd. Koenig's stage presence, namely the coy looks he gives to the crowd, is cutesy for sure, but undeniably captivating. It's easy to see how this band so easily spawns indie super fans. They likely recruited a few thousand more this afternoon.

After a brief pause, the band launches into the high-energy "Cape Cod Kwassa Kwassa," perhaps the best song title that describes this blue-blood New England, Ivy League band with its afro-pop inspiration.

A cymbal-heavy ending and the set is over. The crowd disperses the best that a several thousand can, and it's on to the next band.