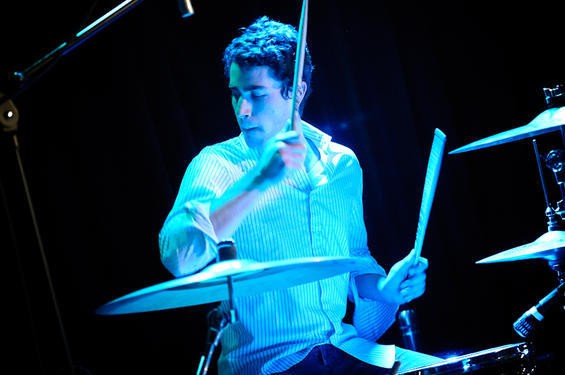 Last night's bill of post-punkers Tokyo Police Club and folk-tinged indie outfit Someone Still Loves You Boris Yeltsin might have looked odd on paper, but it made perfect sense in concert. Both groups boast strong melodic sensibilities and pen lyrics colored with a sentimental streak. These shared elements made for a strong night of sweet pop in a show that fell just short of greatness.

Someone Still Loves You Boris Yeltsin got the show off to an inauspicious start as Phillip Dickey lengthened the pause in opener "Back In The Saddle" to 30 some seconds to retune his guitar. John Robert Cardwell didn't help matters by failing to properly project his lead vocals until halfway through the set. But once they ironed out their flaws, Yeltsin turned out a charming performance of pretty guitar rock. Cardwell and Jonathan James demonstrated great chemistry as a rhythm section as James' bass drum and Cardwell's bass played perfectly sync to produce a nice popping effect. Dickey, meanwhile, livened up the show by bopping around like an excitable third-grader and leading the near-sold out audience through several clap-alongs.

He then brought this animated presence to the drums when he took over for James and gave his guitar to Cardwell midway through the set. (James in turn played bass.) The modified lineup traded some of the old model's tightness for slightly busier arrangements that added some pep to the group's attack. It also benefited from playing some of the group's best and most popular songs, including "Oregon Girl," "House Fire," and "Think I Wanna Die." This run produced a satisfying and energetic conclusion, punctuated by lead guitarist Will Knauer's leap into the drum set.

Tokyo Police Club took the stage next and gave a competent reading of "Favorite Color," but something was amiss. Bassist/singer Dave Monks quickly confirmed it: He was sick as a dog. Monks' illness never went so far as to produce mistakes, but it mostly confined him to a lower register and sapped him of the energy needed to take a truly commanding stage presence. Fortunately, he was still spot-on with his bass work, and the rest of the quartet packed a punch with an exuberant performance. Guitarist Josh Hook was particularly good as he maneuvered deftly from loping arpeggios to rapid-fire washes of 16th and 32nd notes.

The band also had a lot of help from an enthusiastic section of 30 or so fans in the front who bounced and sang along to every tune. Oddly enough, the dull ballad "Hands Reversed" brought the crowd to a higher state of excitement that sustained Tokyo Police Club through the rest of their show. Feeding off this energy, TPC attacked highlights like the dancey "Bambi" and the jerky hooks of "Citizens of Tomorrow" with a renewed focus that led to a strong finish with the punked-out blitz that was "Your English Is Good." The group quickly rallied for a riveting encore of "Cheer it On" that demonstrated the young band's resiliency before drawing the night to a close. All in all, Tokyo Police Club performed admirably under difficult conditions and while the results weren't always ideal, they ultimately played a winning show.