Last night's Menomena show at the Billiken Club was packed with Halloween revelers (a certain drummer of a certain local band was a mean Michael Jackson) and fans of the Portland experimental rockers. Their set didn't disappoint; at various points, people around me compared them to the Police and Morphine, while elements of prog and sparkling indie-rock also abounded. (Sorry this is so lame, I'm tired today.)

The rest of the bands on the bill also impressed. I wasn't familiar with Illinois before the show, but the band's sound reminded me of Built to Spill, Longwave and Flaming Lips. Jumbling Towers -- fresh off a well-received CMJ appearance and a week before they open for the Thermals at Mojo's, congrats! -- have improved greatly as a live band. A little uneven in the past, the band's finally come into its own and matches the stellar sounds on its debut. I sense good things in the future.

My colleague Keegan Hamilton took some snaps of Menomena. See 'em below! 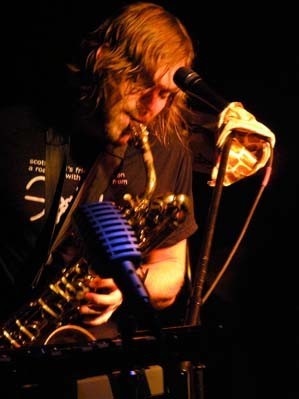