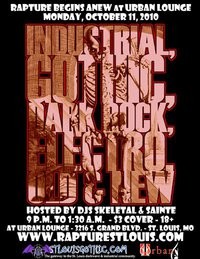 Rapture has been at the Complex for the last year and a half. However, in a statement posted on Facebook, Rapture co-host Joel Lovins (a.k.a. DJ Skeletal) assures that there's no drama or involved with the move.

"If anyone wants to know the dirty details, there really are none," Lovins wrote. "It's strictly a business matter of deciding what was the best direction to take for the future of our weekly event."

Lovins notes that St. Louis now has two other nights in a similar vein as Rapture - art/music/fashion/erotica night Conspiracy twice a month at the Crack Fox and the occasional event Subversion. (In fact, Rapture will be pairing up with Conspiracy for the Monday, October 4, concert with BILE and Thanatos Eternal.) Lovins calls the presence of both nights "a great thing for our scene."

"I've been at this game for ten years, and have seen a lot of changes and other nights come and go, but we have never had the cohesion that we do now," he says. "It's a groundwork for us to build from, and I see some big things on the horizon. For Rapture, we're doing a bit of restructuring and heading back to something that is a little more at our roots."

Details are still being ironed out about Rapture at Urban, but Lovins confirms that Jen Griggs (a.k.a. DJ Sainte) is going to be Rapture's permanent co-host. The first Rapture at Urban is $3 and is 18-plus.