Beatles Day is Packed at Vintage Vinyl, And Here's Why... 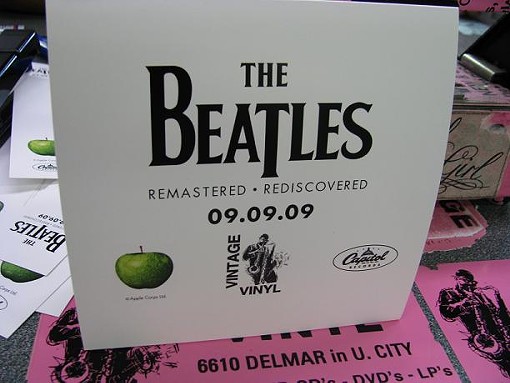 Annie Zaleski
​ If'n you're planning to swing by Vintage Vinyl for its today-only $9.99 Beatles promotion -- $19.99 for the White Album and Past Masters -- get over there sooner rather than later. Not because supplies of the remastered and thoroughly polished albums are in short supply (they're most assuredly well-stocked at VV, with several employees filling the racks constantly), but because you're missing out on a singular record-buying experience.

I can't remember when I've seen a larger group of laughing people queuing up to spend money. "Roll Over Beethoven" is rocking on VV's excellent sound system while old people, young people, people with babes in arms and a kid who is probably supposed to be at high school right now grin at one another with giddy anticipation stand in a line that is moving steadily but not moving quickly enough. And why are we all jamming the aisles? To buy albums we all most likely already own and know by heart?

Yes. Because it's this music. Because it's a chance to hear "Think for Yourself's" funky keyboard percolations in an organic clarity that has been lacking in all previous incarnations of Rubber Soul. (Something I'm hearing right now. And it's divine.)

The Beatles are huge, a myth, four guys who changed the way popular music is conceived, composed and consumed. That's the legend. But -- hold on a second, the swooning "Ooooh-ooooooohs" of "Michelle" just kicked in. I gotta ride this out. Sweet merciful George Martin, that is gorgeous. Just beautiful. It's like falling in love for the first time, you know? Has this song ever sounded better? George's guitar outro is liquid beauty stolen from Keats' mouth.

All right, where were we? Right, the BEATLES. Bigger than life, etc. etc. Forget about the beginnings and endings and all the folderol in between and just focus on the music. That's what these remasters are about, and that's what today is about. This music makes people happy, and there's never enough of that going around. Standing in Vintage Vinyl with the three albums I intended to buy (Rubber Soul, Revolver, White) and the three that somehow ended up in my sweaty hands (Let It Be, Abbey Road, Past Masters), watching cashiers and customers exchange smiles and jokes, seeing Papa Ray in a crisp Beatles t-shirt, getting a free apple from Lew Prince (he bought four crates for today's customers) -- it's delightful to be among friendly strangers who are sharing the same joy and excitement at 10:30 on a Wednesday morning.

And "In My Life" still makes me tear up, I just discovered. Forty years on, the Beatles can still bring you to your knees and then lift you right back up -- even when you're a cynical sonofabitch with nary a kind word for anyone. That's the power of music. It's absolutely worth $9.99 to feel that. But the chance to experience this exhilaration pulsating in a store full of people who are remembering first times and worst times and lost friends and new hopes, all set to a soundtrack that will never be equaled for its humanity and moments of pop invention, that is priceless.

And hey, free apples while they last.