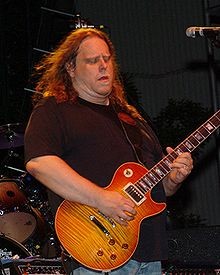 Haynes, who is most well known as the frontman for Gov't Mule (itself an Allman Brothers side project), is touring with recently-formed Warren Haynes Band. Its first album, Man In Motion, came out last week on Stax/Concord Music Group.

Haynes is trying his hand at soul with this most recent release, and he's got the backing band to make it happen: Ron Johnson on bass, Terence Higgins on drums, Nigel Hall on keyboards, Ron Holloway on saxophone and Ruthie Foster on background vocals. Watch the band perform "Rivers Gonna Rise" off the new album below.