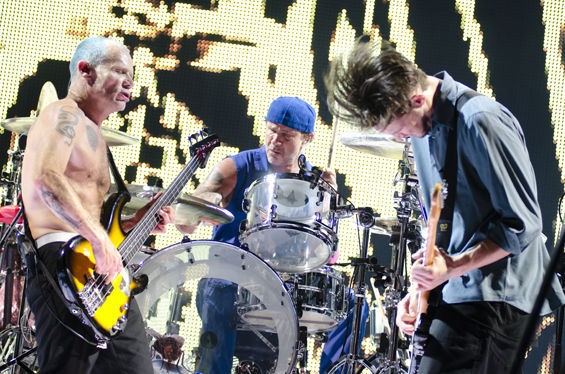 To say that the Red Hot Chili Peppers is one of the world's hardest working bands is beyond an understatement. In recent years, the Chili Peppers have accomplished more than most bands have in a lifetime, despite undergoing some major changes. In 2009, longtime member John Frusciante amicably left the band, ushering in a new era for the rock n' rollers. With the addition of guitarist Josh Klinghoffer, RHCP have been hard at work, resulting in an extensive tour in support of their tenth studio album, 2011's I'm With You. Having recently been inducted into the Rock and Roll Hall of Fame alongside contemporaries Guns N Roses and Beastie Boys, the future of the band burns ever brighter, with no signs of slowing down.

As a band that hasn't regularly played a small-sized venue in over two decades, it was no surprise that RHCP would pack St. Louis' Scottrade Center, nearly selling out its 22,000 person capacity and crossing multiple generations of fans. The evening mounted with excitement as a sea of trademark Chili Peppers t-shirts covered the stands. From the weathered to the brand-spanking-new, each shirt represented nearly 30 years of "Chili" fever.

Shortly after 9:15pm the band launched into "Monarchy of Roses," the first track off of I'm With You. Living bass playing legend Flea, complete in a Big Toe Yoga pose, opened the song with a thumping bassline as singer Anthony Keidis gallantly strided on stage. Reliant mainly upon their performance, the stage was set with an effective use of video projections, providing a live up-close-and-personal HD video feed of each member. Mixing a tasteful blend of HD quality video and montages of Polish-inspired animation, the set-up was a welcomed sight as opposed to the often-exorbitant stage shows of arena rock bands.

"Tonight we're gonna get you rockin' so hard we're gonna reverse the flow of the river." Said Flea. And rock they did. Serving as his introduction to St. Louis, Klinghoffer excitedly ripped into each song as he immediately locked in with the band. Filling in the shoes of beloved fan-favorite Frusciante is a daunting task; learning and perfectly executing nearly three decades worth of material is inhuman. Despite bearing a frightening resemblance to Frusciante's style and attack, Klinghoffer prevailed as he won the praise of the crowd with his own trademark flair.

Along with finding a kindred spirit in Klinghoffer, the Chili Peppers have filled out their current sound with the addition of Brazilian percussionist Mauro Refosco and Chris Warren on keyboard. Adding a subtle, yet complimentary atmosphere to the constantly forward-thinking band, Refosco and Warren sat low in the pocket as they performed alongside songs like "Around The World" and "Dani California." Creating a seamless conduit between songs, Flea and drummer Chad Smith would often run through instrumental interludes, lending to the infectious fluidity of the set. As the evening carried on, the band played an even mix of songs mostly comprised of their last four studio albums: 1999's Californication, 2002's By The Way, 2006's Stadium Arcadium, and 2011's I'm With You.

You may be wondering: Where was "Aeroplane" or "Love Rollercoaster?" Why didn't they play "Soul To Squeeze?" What many fans may not realize is that although the Chili Peppers have been around for nearly three decades, this tour is by no means a farewell. The Red Hot Chili Peppers is a band that is often taken for granted. You hear them on the radio. You expect them to be there. You expect them to be perfect. This is not a band rubbing out a list of their greatest hits. This is a band that consistently produces creatively crafted albums and tour in support of them.

As Keidis sang the opening lines of the rock radio staple, "Otherside," the crowd bellowed in unison, creating one of the more intimate moments of the evening. Exerting an undeniable chemistry between all six players, beautiful renditions of "Californication" and "Can't Stop" sat comfortably next to newer songs like "The Adventures of Rain Dance Maggie" and "Goodbye Hooray."

"This is an old fucking song. This is an old fucking song," said Flea. "People were fucking to this song before Jesus was born - B.C." Then they propelled into the high-energy ruckus romp "Me and My Friends," the only track played from 1987's The Uplift Mofo Party Plan. Recognizing the equal importance of punk bands The Germs and Bad Brains and funk pioneers Funkadelic and Sly and the Family Stone, it would be this merging of styles that would set RHCP apart from the quickly aging hair metal of the mid-80s. The Chili Peppers didn't just pop into the global consciousness with a one hit wonder; they broke into the mainstream and stayed there. 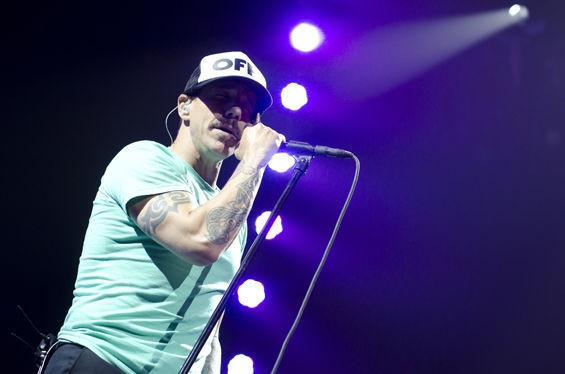 As the lights lowered, the unprovoked roar of a restless crowd resonated throughout the arena as the band played the opening to "Under the Bridge," one of their biggest radio hits. Ending with the catchy-as-hell "By The Way," the Chili Peppers played with an unrivaled intensity, transforming a personal purging of emotions into vibrant stadium anthems.

In this stage of RHCP's career, an encore isn't merely an expected tradition, but rather a gift for both the band and the fans. After a deafening crowd roared non-stop for over two full minutes, the Chili Peppers were back in full effect. "We love you!" exclaimed Smith as he and Refosco walked back on stage. In true fan appreciation, the duo played a percussion medley employing the use of drums, a traditional Afro-Brazilian cuica, and vibraphone. Quickly building tension through a full-fledged prog interlude, the band transitioned right into "Sir Psycho Sexy, the potent sexual jam off of 1991's Blood Sugar Sex Magik. Offering the audience a look into both their past and present, the band ran through a sugar-rush version of Robert Johnson's "They're Red Hot" and "Meet Me On The Corner" off of 2011's I'm With You.

As if scratching the collective itch that plagued so many, RHCP finally played one of its most well-known hits, "Give It Away." Grown men moshing in the stands, young bucks singing word for word, women grinding on each other - the crowd was losing it. Full with Flea's trademark pelvic thrust rumba and Keidis' cock-of-the-walk rain dance twirl, the band brought it down to a mind-blowing close.

In an earnest acknowledgement of their fans, Keidis bid the audience adieu with warmth and enthusiasm as he left the stage. Recognizing the importance of musical enlightenment and the support of live music and grassroots music communities, Flea offered these words of advice: "Support live music! Support all kinds of music! Punk Rock. Hip-hop. Funk. Violins. We Love you!"

At the end of the evening, Smith smiled as he said, "Fuck, you guys are awesome. It's such an honor to play for you guys." The crowd answered through a wall of celebratory screams, echoing a similar sentiment. Leaving as confidently as they came on stage, the band whisked off into the evening knowing they owned the night. 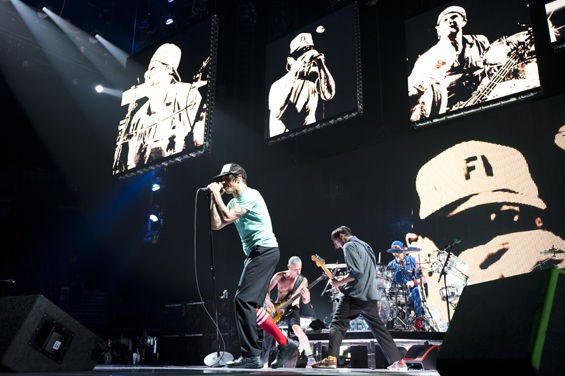 Personal Bias: I grew up listening to the RHCP and feel as if they have been ingrained into my musical DNA. Having seen RHCP on their 2003 St. Louis stop with The Mars Volta and Queens of the Stone Age, it is safe that this band doesn't know how to play anything but to perfection.

Holy Shit Moment: Amidst the introductory free-form jam leading into the encore, Flea walks on his own two hands all the way to his bass rig. Top that.

Overheard: "Everybody loves this song" as RHCP played "Dani California" to perfection.