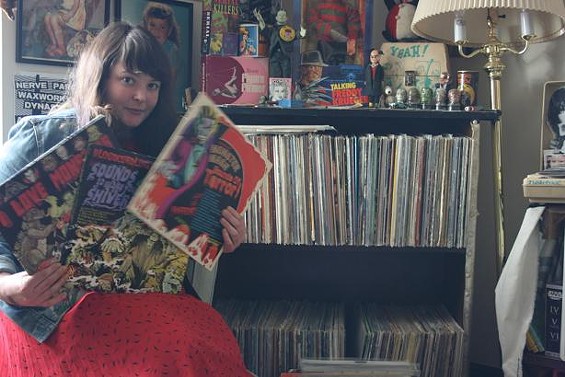 Having just returned from the St. Louis Record Show this previous Sunday, Last Collector Standing caught up with Doom Town bassist Ashley Hohman. On the way up to her third-story room in her communal home behind KDHX studios, different genres of music echo from all the neighboring rooms. Hohman explains "music is her life," be it the house full of fellow record collectors constantly spinning vinyl, her dedication to the St. Louis Mixtape Club, or playing in her own bands. Nestled in the corner of her bedroom is her cherished record collection. There we discussed her musical roots from the St. Louis Record show, a chance car ride with X's John Doe and how Doom Town got their name.

Last Collector Standing: You were just at the St. Louis Record Collector Show. What did you bring home today? Ashley Hohman: The first thing I found today at the record show was KICKS magazine -- an original copy of issue number 4 with Wanda Jackson on the cover for four dollars. That was my big exciting score of the day. KICKS magazine was started by Miriam Linna, who was [an early] drummer in The Cramps. She started Norton records, which is a label from New York that rediscovered Hasil Adkins and Esquerita and put out their records. [KICKS magazine] was about all of those people, and a bunch of other obscure rock & roll and early R&B. That was the coolest thing I found today.

I found two Cramps records I was really excited about, Songs the Lord Taught Us and Gravest Hits, which I'd never seen on vinyl before. That was really cool. [Also] The Damned, Machine Gun Etiquette, which is a record I've been looking for for a really long time. It's one of my favorite punk records.

So how did you first get into music? My dad is a big record collector. He's always been really into music. When I was twelve, I started going to the record shows with my father. I always thought records just looked so cool, so I would look at things that had cool album art, or bands that I knew the name of like the Doors. When I was 13 or 14, Jason Rerun and Ann were selling records and I bought a three-dollar copy of Blondie Parallel Lines from them. It still has the Rerun three-dollar sticker on it. [Laughs] That's when I started buying more known '80s new wave and power-pop from going to the record shows.

Then I just started buying albums based on album art, or because I'd heard the bands name, or another band had covered this band. It started like that because I never had Internet as a kid. It was all based on buying record just because they looked cool. 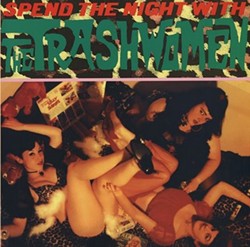 Then I started going to Euclid Records when I was fifteen. That's how I found The Trashwomen LP, which was life changing. They were an awesome early-'90s surf punk band from California. Estrus Records put out their LPs. That was like, "Holy shit! Women play this crazy wild surf music with these extremely bratty vocals!" Estrus also released Mummies records. I found Mummies records for six dollars at Vintage Vinyl. I didn't know anything about this stuff. I just bought it because it looked cool. They are just the best album covers ever - they're all dressed up as mummies jumping off an old '60s ambulance.

You just described The Trashwomen record as a "life changing" album. A lot of people that I've talked to describe having "turning point" albums that change their musical direction. How was the Trashwomen's album "life changing" for you? The Trashwomen would be more "life changing" in the fact that it combined all these different elements of music, and it was created a decade after punk broke. It was also played by women. It was really good, shredding surf guitars.

The record that totally changed how I thought about music was Wild Gift by X. [They're] still my favorite band. Being fifteen and hearing that record for the first time was mind blowing. I grew up with an older brother who was into bands like Descendents, Ramones and the Clash, but this deeper layer in X's music was totally new to me. The lyrics were amazing. It was loud, but really meaningful.